Volleyball1on1 offers the largest resources of instructional volleyball videos and drills on the web for beach volleyball. Our instructors include some of the greatest players to ever play and coach the sport.

ric shows an entire series of videos on passing. Everything is covered in great detail starting with the basics to a drill for superior passing skills.

1. Position is key by always being aware of where the end line and back line are. Decide before the serve who will cover the middle of the court.
2. Keep the arms out in front and prepared for anything to easily locate the ball and make the pass. 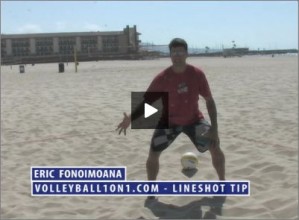 Eric presents his tips and lessons on how to defend the line shot on the beach. This includes helpful tips on footwork, movement and more. 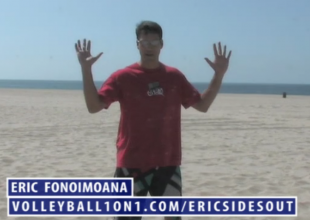 Olympic gold medalist Eric Fonoimoana presents his series on spiking and sideing out every single time. Known as a powerful attacker Eric tells how he became prolific in scoring points.
Prepare and sell the hit by always being aggressive on the jump. A higher vertical is achieved by swinging the arms back on the approach then swinging the arms up to get out of the sand quicker. Scout out the opponents defense before the spike to get the kill. 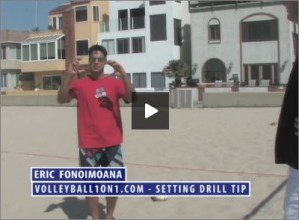 Setting drills are how hitters turn into effective setters. Eric shows a drill and tips he learned on his way to becoming an Olympic champion. 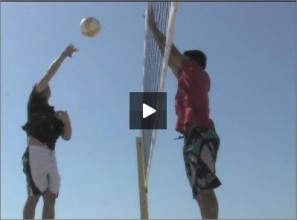 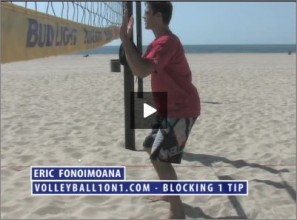 Olympic gold medalist Eric Fonoimoana knows blocking on the beach is multifaceted. Presented here is part one of a three part mini series on blocking.   To view all of Eric Fonoimoana’s videos – Click Here! 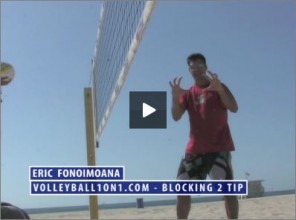 Eric demonstrates a drill to become an effective blocker on the beach. Presented here is part two of a three part mini series on blocking. 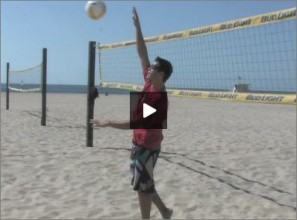 Warming up correctly leads to success in the game. Eric gives multiple and invaluable examples and tips that made him an Olympic gold medalist.   To view all of Eric Fonoimoana’s videos – Click Here! 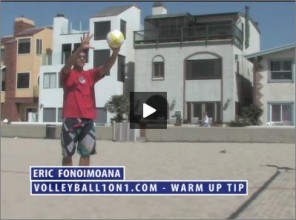 Demonstrating one of his favorite warm up routines for hitting Eric explains key items on what to do.   To view all of Eric Fonoimoana’s videos – Click Here! 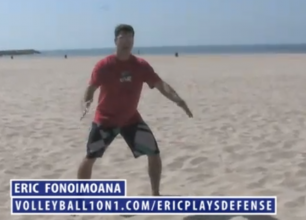 Defense wins championships. Eric presents a series of videos on defense that led him to the ultimate prize, an Olympic gold medal.

1. Begin by positioning on the sand with the feet and arms in the correct location.
2. Using correct footwork to run down a shot with minimal steps increases speed. 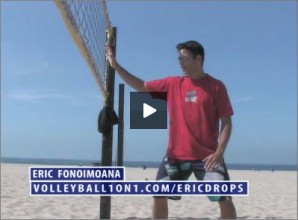 ric shows how dropping off the net means first identifying when to drop into the court after the set is made. In this series it is described how learning this skill helped make him an Olympic gold medalist.

1. Good footwork starts with the inside foot facing parallel to the net and ending with a hop step. 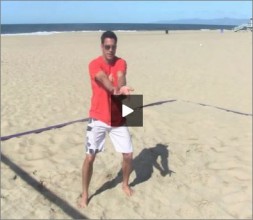 Eric learned on the beach how to bump set and now presents a series of videos showing how to master this skill. Valuable insight on how to use the bump set properly is explained from the 2000 Olympic gold medalist.
1. Start in the correct stance by getting the platform out early and level to the ground. 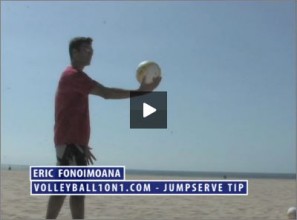 Jump serving is the most powerful and preferred method to score points on the beach. Eric demonstrates how he became an Olympic champion using the jump serve.   To view all of Eric Fonoimoana’s videos – Click Here! 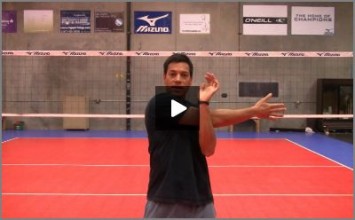 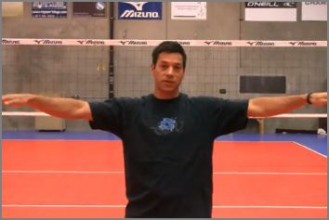 Eric Fonoimoana Volleyball Stretching – Arm Circles Exercise 1 – Arm Circles: Small/Big – 10 rep each side each way Note: Eric Videos do not require the mat. If you are looking for some great warm up stretches for volleyball, developed by two gold medalist namely Eric Fonoimoana and Misty May-Treanor be sure to look… 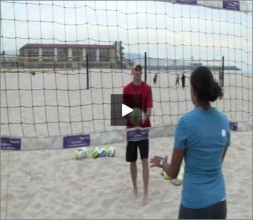 Priscilla discusses and demonstrates playing defense for blockers. This video shows how a blocker is still responsible for short shots directly behind them. 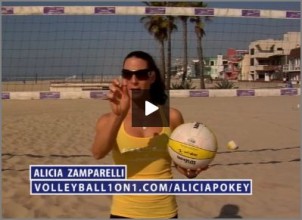 The perfect pokey and how it is done is shown by Alicia in this video series. Every player must have this move in their arsenal.

1. What the pokey is and a drill to get started
2. How to use the pokey on defense
3. Quickly adjust when the ball is hit easy and the hands are already up high 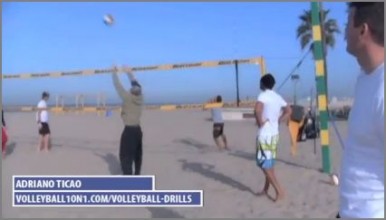 Good volleyball warm-up drills are critical not only to help avoid injury but also to improve skill and get the athletes ready to play. In this volleyball drill series Brazilian Volleyball Coach Adriano Ticao puts his two athletes through a series of drills that accomplish a number of important task! 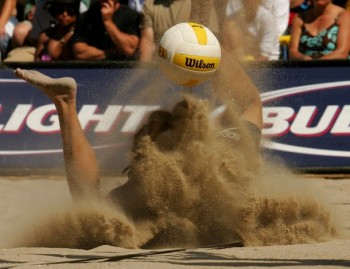 How To Dig A Volleyball

This series contains 6 videos by Olympian Stein Metzger on how to dig a volleyball. 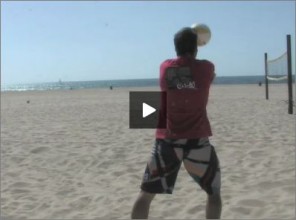 How to Bump A Volleyball

In this article Gold Medalist Eric Fonoimoana presents 6 instructional volleyball coaching videos on how to bump a volleyball. 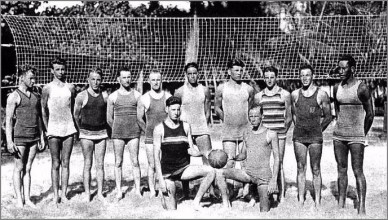 AVP History and its Impact on Beach Volleyball 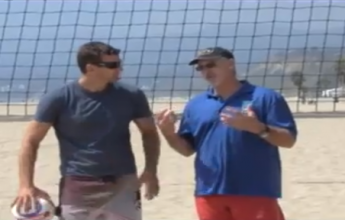 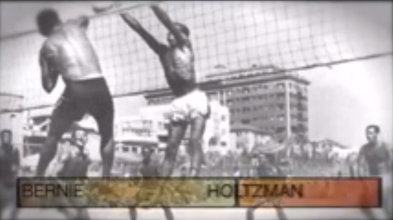 William G Morgan in 1895 invented the sport of volleyball while working in Springfield Massachusetts. He was the YMCA Physical Education director and was intrigued by the sport of basketball which was invented less than 10 miles away and less than 4 year earlier. 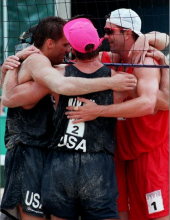 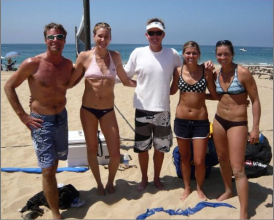 I’ve delayed writing this article now for several days in the hopes that I’d receive a lot of emailed pictures one of my teammate’s parents took throughout the whole day. Needless to say I’m still waiting for the pictures and will edit this post as soon as they arrive (hopefully soon). But because the event was almost a week ago and was extraordinarily fun I want to get this up now. 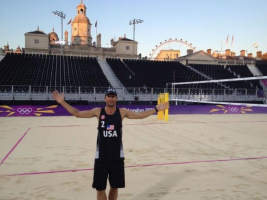 Giving Back to our Sport

Today Olympic favorites -Jake Gibb and Sean Rosenthal lost to a lessor seeded Polish team in an epic battle in London. The commentators called the match an upset which in all regards it was but if you watched the match you would know that the better team won. Sure, Jake and Rosie have a better track record and are seeded higher 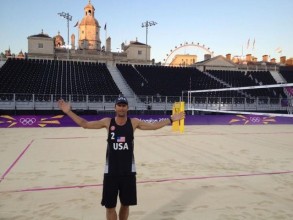 Many of you may have received an email from the AVP regarding Jake Gibb’s amazing story of persevering to make the 2012 Olympics in London. Stories of this kind where someone has to overcome a tremendous hardship are my all-time favorites. Ernie Davis, Lance Armstrong, Amare Stoudemire, Oscar Pistorius, and many many others are prime… 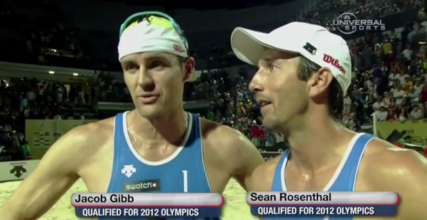 I just saw this and wanted to pass it along immediately! Andor 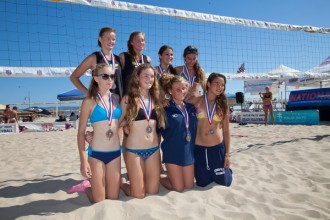 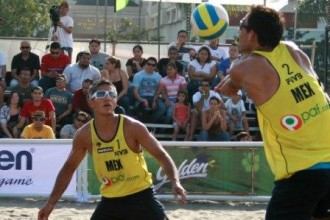 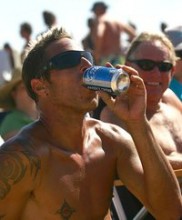 Volleyball1on1 just released their latest videos featuring Dana Camacho. There is so much valuable information that Dana shares with subscribers, but the true gem is understanding how Dana “The Skyball King” Camacho has perfected his unique skyball serve. As a relatively new beach volleyball player I have tried serving skyballs a little bit.

1
2345678
…910111213
Go to Top
Call Now
We use cookies to ensure that we give you the best experience on our website. If you continue to use this site we will assume that you are happy with it.OkPrivacy policy