AVP History and its Impact on Beach Volleyball

You are here:
BeachVolleyball GeneralVolleyball History

Volleyball History and the Impact of AVP History on Beach Volleyball

The 80’s saw the start of the AVP tour when players at the 1984 World Championships in Redondo took up a strike against the current promoter. It was then that they started their own tour. The 80’s saw a massive expansion of the sport of beach volleyball and the AVP acted as a catalyst for it promotion. With its eclectic mix of Southern California beach volleyball characters this once nonprofessional sport skyrocketed in growth, sponsors and money.

Volleyball Hall of Famer, Bernie Holtzman described volleyball as such; “Volleyball is God’s gift to the beach bum!” For many the AVP complimented this beach bum life style, it was more than a sport, with the AVP a new Anthem was formed: “We are the AVP!” and the AVP is Beach Volleyball.

During this period two players dominated AVP History and acted as Beach Volleyballs greatest ambassador. They were Sinjin Smith and Randy Stoklos. Not only did they become household names in the United States and set the stage for others to follow. They also traveled internationally and help the FIVB grow its reach, using the AVP tour as a model to expand into beach volleyball where before the FIVB was just indoor volleyball. 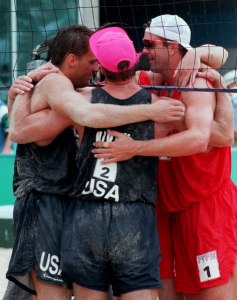 The early 90’s were the glory years for the AVP Pro Tour as the sport’s popularity grew, sponsors came running and prize money hit its peak. Kent Steffes and Karch Kiraly (Who most would agree were the greatest team beach volleyball team ever, and perhaps the two best beach volleyball players to ever play the sport) dominated the tour during this time!  Their success together culminated with them winning Gold in Atlanta in the inaugural event of beach volleyball at the Olympics. It is estimated 1 billion people watched beach volleyball globally during the Olympics in 1996. Also at this time the AVP also started holding women’s events with the WPVA tour.

By 1997, after a series of bad business choices by management and under mounting financial problems as sponsors began to withdraw support for the sport, the AVP entered Chapter 11 bankruptcy in 1998. For a short time volleyball fans floated the purse with small events, but it was not until 2001 when Leonard Armato returned to reorganize the struggling tour.

As a result of Leonard Armato efforts the AVP caught some new momentum.

The tour continued through early 2000’s again returning with events nationally and with larger purses of money, but nothing close in inflationary dollars to that of the 90’s.

In 2010 the tour again declared bankruptcy until it was bought and came under new management on April 2, 2011.