Sinjin Smith, One of Beach Volleyball’s Best Players, But by Far Its Greatest Ambassador 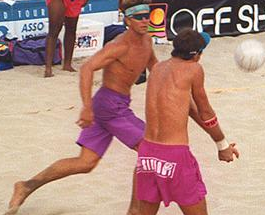 Sinjin Smith is known by many as one of the greatest beach volleyball players in the history of the sport. From the 1980’s to early 1990’s Sinjin Smith and his partner Randy Stoklos were the most dominant team in beach volleyball history. Sinjin real name is Christopher St. John Smith.  “Sinjin” as most people know him is the Old English pronunciation of St. John.

It started in California with the first professional beach volleyball circuit in the country. As the best team on the Beach Volleyball Pro Tour during the 80’s, Sinjin and Randy were instrumental in many things that helped moved the sport forward.

This includes attracting top sponsors and becoming the face of the sport in the 80’s.

Hi impact includes taking a major part in forming the AVP. The Association of Volleyball Professionals which would later run beach volleyball in the United States.

Incredible “Do whatever it takes with fans,” few sports have ever had a player more willing to interact, sign autographs and be involved with the fans.

Finally as Al Scates (Legendary UCLA Volleyball Coach) often says with a big smile, playing with Randy Stoklos. “Sinjin is the only guy in the world that could play with Randy, now that takes talent!” 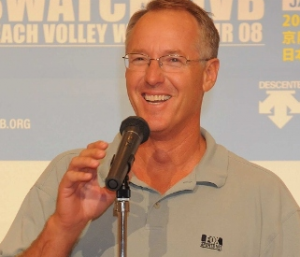 By 1990, FIVB Beach Volleyball International Circuit has developed offering a total prize money of $140,000. The tournament is named the World Series and offers players from many of the best countries in the world including Brazil, Italy, Japan and United States. Sinjin Smith and Randy Stoklos become the Men’s World Champions by the end of the series and again Sinjin is instrumental in the growth of the sport during this time expect now he is doing is on the international stage.

By 1992, prize money reaches $950,000 for the Beach Volleyball World Series. The Series is made up of six events globally. It was during this year the first ever women’s FIVB Beach Volleyball competition takes place in Almeria, Spain. Sinjin Smith was instrumental to this growth for women’s volleyball. Also this year 1992, Sinjin Smith and Randy Stoklos become World Champions for the 5th time.

In 1993, the International Olympic Committee grants the sport medal status for the first time for beach volleyball. Beach Volleyball becomes an Olympic sport.  Twenty-four men’s teams and eighteen women’s teams will compete for the first Beach Volleyball Olympic Gold Medal in the upcoming 1996 Atlanta Olympics. It is estimated that over 1 billion people watch beach volleyball globally during the 1996 Olympics.

Sinjin Smith Qualified for the 1996 Olympics with partner Karl Henkel and lossed to eventual winners Kent Steffes and Karch Kiraly, but not before having two match points on them in the semifinals. This is one of the greatest games in beach volleyball history and as such we included some video of it!

Sinjin Smith Impact On the Sport of Volleyball as Ambassador Has Also Been Felt in Other Ways.

For all these reasons above and more Beach Volleyballs Greatest ambassador and one of it best players is beach volleyball legend Sinjin Smith.