You are here:
BeachSand VolleyballVolleyball History 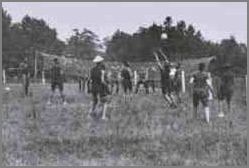 History of Volleyball including a picture of players from the YMCA

William G Morgan in 1895 invented the sport of volleyball while working in Springfield Massachusetts. He was the YMCA Physical Education director and was intrigued by the sport of basketball which was invented less than 10 miles away and less than 4 year earlier. William G Morgan was however concerned that basketball, due to is physical nature was not an appropriate activity for women or elderly YMCA members. In order to accommodate this demographic of women and the elderly he invented Mintonette. This new sport Mintonette combined basketball, baseball, tennis and handball to create something more active than baseball but less active than basketball. The name Mintonette came from badminton or minton as the original game involved Mr Morgan stringing a Badminton Net across a gym floor.

William G Morgan describe the sport as follows: “Mintonette play involves keeping a ball in motion from side to side over a high net with any number of person being able to participate on either side. A person on one side of the net starts play by hitting the ball over the net to the opposition. The opposition goal is to return the ball back over the net without letting it hit the floor or court on their side of the net. Thus the ball volley, back and fourth until it land on the opponents side or it is hit out of bound. ”

History of Volleyball – The Name

The name volley ball (Two Words) was adopted in 1896 when a spectator Dr. Alfred Halstead when he observed the volleying nature at the exhibition match at the local YMCA. In 1952 the name was changed to one word namely Volleyball! 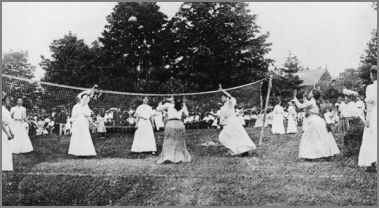 History of Volleyball at the YMCA.

William quite the YMCA in 1900 to follow a career in business. On December 27, 1942 William G Morgan Died. In 1985 the Volleyball Hall Of Fame made him their inaugural member with the opening of the hall. Doug Beal the 1984 Olympic Gold Medal Head Coach was the keynote speaker. The Volleyball Hall of Fame was established by the Greater Holyoke Chamber of Commerce. The process started in 1971 and in 1978 added a nonprofit for the purpose of planning and funding.

The history of volleyball at the Olympics.

Volleyball’s Fun Sister Sport, Beach Volleyball and its impact on the history of volleyball

Beach Volleyball started in Southern California and also the Hawaii Island, today sand volleyball has worldwide popularity, even in nations without conventional beaches, such as Switzerland. 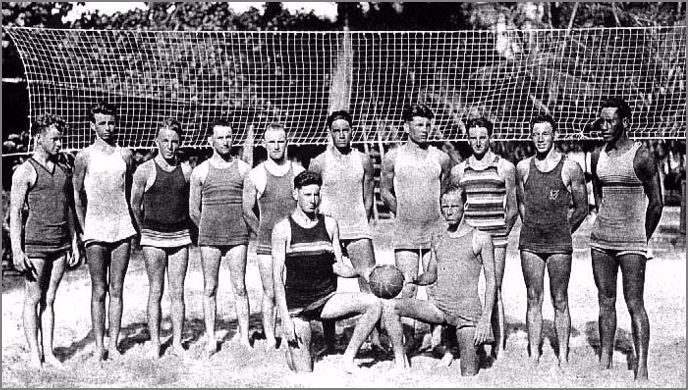 In Hawaii sand volley games took place on the beaches of Waikiki in Honolulu, Hawaii at the Outrigger Canoe Club. The game, originally for surfers bored because of small waves quickly grew to organized six-man matches. The most famous Hawaiian player back in the day was legendary waterman, Duke Kahanamoku. It is rumored the guy had a wicked round house serve. His impact on the history of volleyball is felt today with Hawaii having the highest participation rates of young players in the sport out of many states in the US.

History of volleyball in California

In Southern California which today is the Mecca of both Beach and Indoor Volleyball grew when the city of Santa Monica in 1920 added new jetties in order to create a larger area for public entertainment. As a result of this extra space, public volleyball nets as well as private beach club nets sprouted, up and down the coast. At the time most people played six-on-six volleyball and the modern concept of two-on-two beach volleyball did not start until the summer of 1930. That summer Paul “Pablo” Johnson, an indoor player of Santa Monica Athletic Club, while waiting for the other players to show up for a six-on-six game suggested instead the modern two-on-two concept of playing beach volleyball. Since the 60’s most beach volleyball consist of the 2 on 2 game. There is one other 6 on 6 beach tournament called the Manhattan Beach 6 Man, but other than this the sport competitively is mainly 2 on 2.

By 1965 CBVA is founded which would have a major impact on the history of volleyball. The California Beach Volleyball Association goal is to establish a uniform set of rules as well as a organized schedule.

By 1984’s the Pro Beach Volleyball Tour had grown significantly to 16 events and a total prize money of over $300,000. It was during this time that Karch Kiraly made his impact felt on the sport and helped catapult the sport forward to national and global recognition.