Spiking and Serving Technique – Goose Neck, Snap it Like a Pig

Stein Metzger has incredible experience playing in different environments and as such has learn different techniques and strategies from playing in different places that can be applied to anywhere you play. This video is a great example of something Stein picked up while competing in Boulder, Colorado on the AVP Pro Tour that really helped him be a better player and get more kills and more aces while playing at altitude.

This technique can also be applied at sea level where most beach volleyball is played and will help you get more serves in as well as get more kills particularly from bad sets that are off the net or on the net . The technique is call the “Goose Neck – Snap it Like a Pig” and name comes from a video on Youtube that really brings the point home of what you need to do. The “Goose Head” is great verbal imagery to describe how the hitting arm should look on contact with the ball. 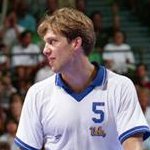 Stein Metzger was a 2004 Olympian, an 18 time AVP champion, while achieving, team of the year 2005 and 2006, FIVB winner, along with being a 2 time Manhattan Beach Open Champion. He is also best known for leading UCLA to 4 consecutive NCAA finals as a starting setting of which they won 3 championships and was named the MVP his senior year. Stein is also a 2009 UCLA Hall of Fame Inductee.
Video 1 – Instruction