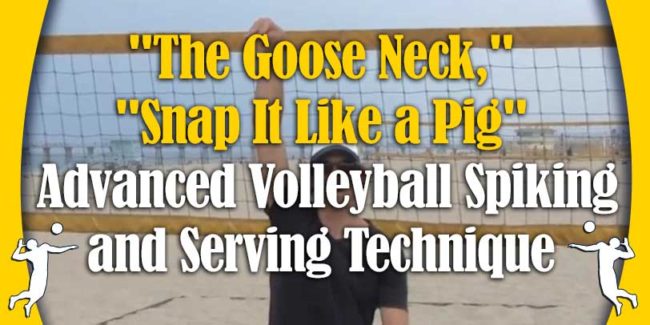 Spiking and Serving Technique – Goose Neck, Snap it Like a Pig

This video is a great example of something Stein picked up while competing in Boulder, Colorado on the AVP Pro Tour that really helped him be a better player and get more kills and more aces while playing at altitude. The technique is call the “Goose Neck – Snap it Like a Pig”. 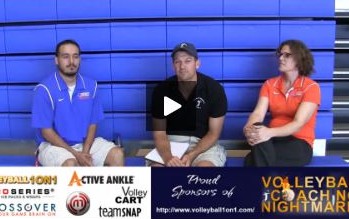 In this brutally honest no holds bar video we go through one of the biggest mistakes former players make when coaching and get honest about adjusting goals and expectations when coaching youth players. This is an insightful new look at WHY WE COACH and why we should coach. Our job as coaches is more then just winning it is about changing lives and developing people. 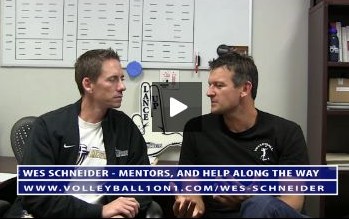 Conversations from the Office – Wes Schneider Mentors Along the Way

This video features a frank and fun conversation about Wes mentors as a coach. No great coach went the road by himself, rather they had help and often learned from the best. In this video is an intimate look at who helped Wes become a good coach and how all coaches should do the same. 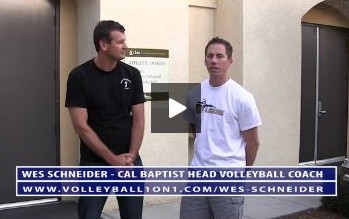 Introduction to Cal Baptist University and the Mens Volleyball Program 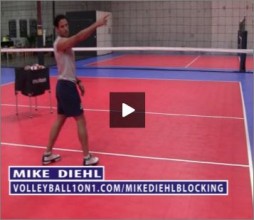 Mike covers blocking in this 6 video series. Broken down are key points to the swing block, blocking the outsides in position two and position four, how to play in transition and finally what a blockers mentality must be. This video series is a must for all indoor players and coaches.

Stein presents part 13 of 27 for setters. Discussed is how to be an effective leader and taking charge as the general on the court.

Stein presents part 11 of 27 for setters. Discussed is what is bic set is and how to run “The Bic” effectively. For those interested in the history of the “Bic” set and How Jeff and Stein created the name and were the first to run it in college volleyball go here now for more information. 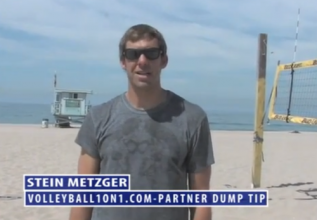 Dumping your partner in volleyball for whatever reason you may have is a very delicate process that requires the proper tact and technique so as to move on from your former volleyball partner without making an enemy. Some Fun… 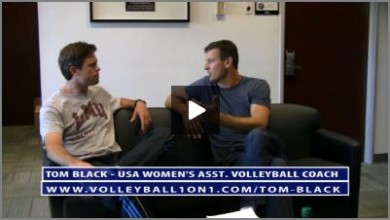 Tom is congratulated on being named the USA women’s assistant coach under head coach Karch Kiraly and in this video shares his experience of what this job entails. 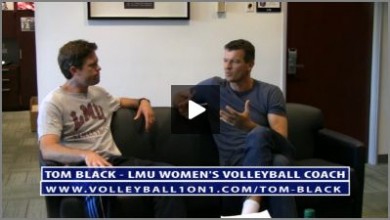 Tom tells how great learners are tested, push through harder levels, then achieve success. Plus he shares a funny story from his first year at LMU as a coach. This story is extremely revealing as it shows Tom Black’s focus on the process rather than the end result. Watch the video and see if you agree. 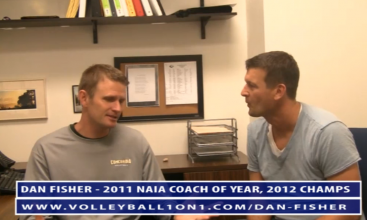 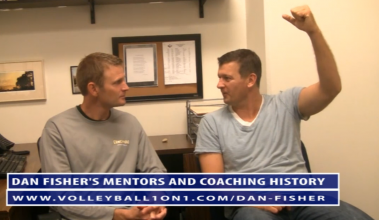 This is a great video where Dan shares his thoughts on some of his mentors and the people that have influenced him as a volleyball coach. 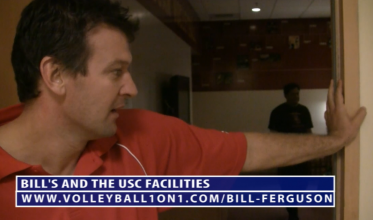 In this video Bill talks about some of his favorite players he has coached and why. 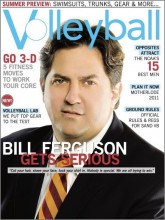 Bill Ferguson – Conversations from the Office, Bill On Coaching Volleyball

In this video Bill Ferguson talks about his journey to becoming a head volleyball coach and the people and lessons he learned along the way. This video is a great for players and coaches alike and offer wonderful insights and perspective into the sport.

Bill Ferguson – Conversations from the Office, Coaching Advice and Secrets

In this video Bill offers coaching advice and secrets for coaches looking to improve their coaching skill. Also Bill shares what he has learned and offers his perspectives on coaching. This includes how Bill looks outside the sport of volleyball to help him improve as a coach. 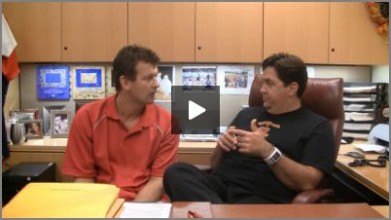 Bill Ferguson Conversations from the Office 2

This next series of videos features an intimate conversation with Bill Ferguson about the practice, the drills, his coaching philosophy and more. This series gives you an insider, in depth look at Bill as a coach as well as the USC volleyball program. Bill Ferguson – Conversations from the Office, Breakout Sessions – Bill working with the setters

In this next video Bill Ferguson talks about his unique coaching influences and how they impact all aspects of coaching particularly how he runs practice. Most viewers will find this video interesting from the perspective of how football and USC football has influenced Bills coaching.

This next series of videos features an intimate conversation with Bill Ferguson about the practice, the drills, his coaching philosophy and more. This series gives you an insider, in depth look at Bill as a coach as well as the USC volleyball program.

Individual Videos for Conversations from the Office 1 are as follows: 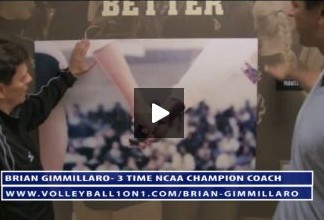 Long Beach State Women’s Volleyball locker room tour with Brian Gimmillaro. In this exceptional video Brian shares stories behind one of the greatest college volleyball programs in country. See an insiders look of the Long Beach State facilities as well as hear Brian share stories about some of the greatest players to play the game including Misty May-Trennor, Danielle Scott-Aruda, and Tara Cross-Battle to name just a few. 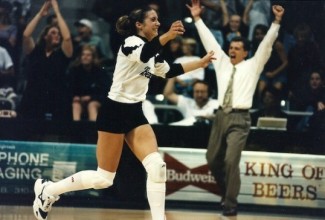 Long Beach State Women’s Volleyball Campus Tour with Brian Gimmillaro. This is an exciting video where you get to take a tour of the incredible rich volleyball history that is Long Beach State Volleyball. This includes NCAA championships, famous players and more… Oh and let me not forget Brian getting into details about the first undefeated women’s team in NCAA History. 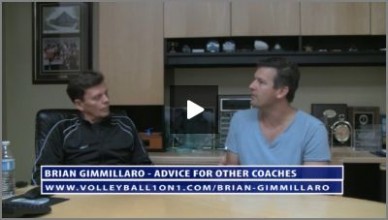 In this video Brian Gimmillaro offers advice on coaching volleyball. His coaching advice offers great insights into the coaching philosophies and ideas of one of America’s greatest indoor volleyball coaches. 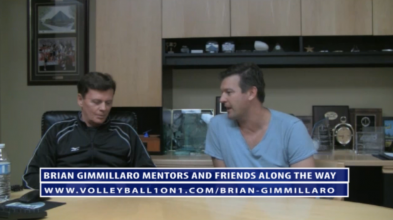 Brian Gimmillaro Volleyball Mentors and Friends along the Way

In this great person video featuring a “Conversation from the office” Brian Gimmillaro share his thoughts on his volleyball mentors and friends along the way. Like all great coaches, Brian learned volleyball from the people that came before him and this video show that. 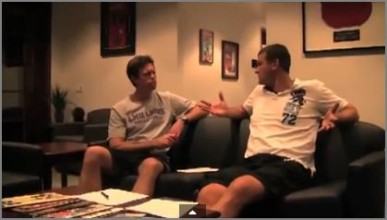 In this free video Tom shares some great stories and history about his mentors and the people that helped him become a great coach. 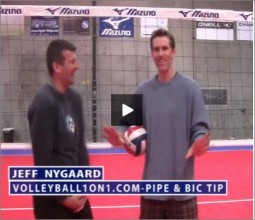 The Bic is a very well known play in volleyball that gets its name from Stein Metzger and Jeff Nygaard. Jeff had a direct hand in naming the play while winning two NCAA championships. Here he talks about it and how to run it successfully. 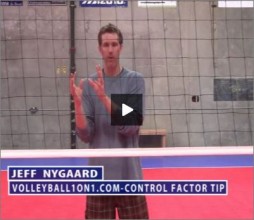 Staying in control lies between not trying at all and trying too hard. When trying too hard mistakes will be made. Jeff presents a video that mentions fellow Volleyball1on1 instructor Marcin Jagoda. 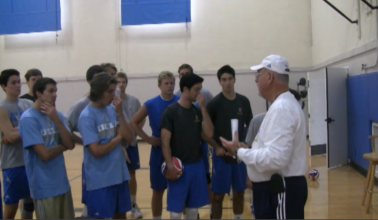 This article contains links to a full indoor volleyball practice we filmed with Al Scates including drills, videos and more. This is a rare opportunity to see the greatest coach in NCAA Volleyball History at work. 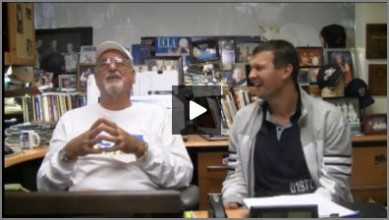 Great video and story of how the most successful coach in NCAA volleyball and all sport history fell into the job of coaching volleyball at UCLA and how he ended up staying for 50 incredible years. 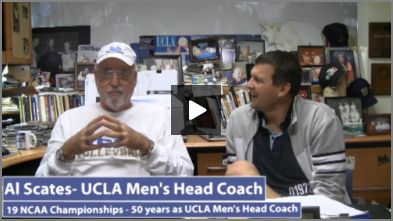 Another great video from our interview and conversation from the office with Al Scates. In this video Al shares more stories and talks about the greatest players he ever coached. 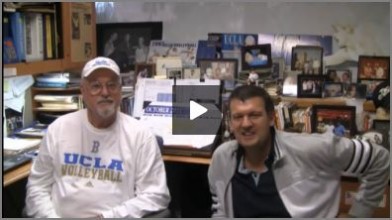 l Scates shares some great stories about his championship titles including which was his favorite and why. 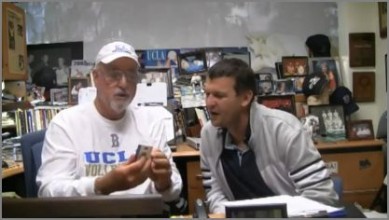 This is a great interview where Al reflects on his mentors and how they taught him to make it fun for the players to come to practice. Plus how a mentor made him concentrate on getting his masters degree and his relationship with legendary basketball coach John Wooden.

12
Go to Top
Call Now
We use cookies to ensure that we give you the best experience on our website. If you continue to use this site we will assume that you are happy with it.OkPrivacy policy