You are here:
Volleyball History

How Mintonette was Invented and Later became Volley ball, and then Volleyball

Mintonette as it was originally called was the name given to the sport founded by William G Morgan that later became volley ball and today is known as volleyball. The sport roots can be traced back to Holyoke, Massachusetts when William the director at the local YMCA created the sport as an alternative to the more physical basketball. Basketball was becoming popular at the time but Morgan wanted to create a sport at his physicality where his members did not have to run. So he strung a badminton net in the gym and using the bladder of an old soccer ball invented volleyball.

The sports origins of “mintonette” are rooted in the fact that the original sport was much like badminton so “minton” to “mintonette.” The court was  25 by 50 feet originally and the net 6 feet 6 inches high. In attempt to bring in other sports the game originally was mimicked after baseball with 9 innings and 3  servers per inning. Also originally there were unlimited number of players on each side.

William G Morgan died On December 27th 1942. He was inducted in the volleyball hall of fame in 1985 at its inauguration by another future hall of famer Doug Beal. 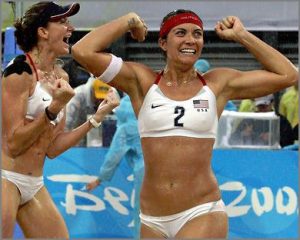