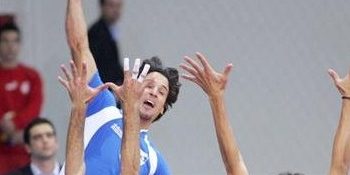 Hi, I’m Andor Gyulai – Owner of Volleyball1on1.com, I created this video to express some frustrations I have in the new ways volleyball spiking is being taught by people who have little experience playing the game, especially beach volleyball as well as minimal experience coaching youth successfully. I made this video to bring some new points to the conversation and hopefully give some confidence to experience coaches who are questioning what they are teaching and if it is correct in their coaching philosophies.

Little about me, I won a national championship at UCLA, I’m making a run for South Africa for 2016 Olympics, I own Volleyball1on1.com – #1 Volleyball Coaching Website in the world, I have filmed over 2000 videos with some of the best coaches in the world, and I have been coached by some of the best coaches in the world including top Japanese coaches (Who I feel are the best on subject of spiking technique) and I have been coaching while playing since 16 where I coached my high school my junior and senior year, and while in college I ran my own club where I personally coached 10 teams.

To provide some of the expertise as it relates to shoulder movement and volleyball shoulder injuries, I have brought Ryan Kendrick, BPhty, MPhtySt – A Musculoskeletal Physiotherapist who has extensive experience working with top athletes in all sports, but specifically relative to throwing / overhead sports cricket, tennis (Part of “The Dream” Team that fixed world #4 – Greg Rusedski), baseball swimming and volleyball. Specifically for volleyball his company Dynamic Tape or bionic tape is used on FIVB, AVP and by Brazilian indoor national team.

So here is a video of someone whose technique has supposedly been corrected. Now I pulled this video directly off YouTube and this is what they are promoting! Now note the changes I am suggesting are easy and something that most volleyball coach can easily fix this.

Now for me there is allot of problems with their advice. What I do like is
1 – They have improved the conversation on using hips and trunk rotation torque for power. I have always said there are four ways to generate power, 1- Wrist, 2 – Triceps, 3- Lat / Trunk – , 4 – Hips and Trunk Rotation. Obviously your largest muscles come from your hips / trunk on your body so this should lead your power generation going forward acceleration to spike.
2 – Contact Point – On contact you do not want your hitting shoulder above your aiming shoulder as this stabilizes your hitting arm in the shoulder joint. For me I have always taught to be turned left / aiming shoulder down as it create a higher contact point so your hitting joint is higher, but also more stable in the socket.

3 – Deceleration of the arm is important and must be considered however the way they are teaching it and the extreme cross body trunk use for declaration can lead to back injuries as a result of going from one extreme to the other.

In reviewing, as I said in the video I think the player technique could of just had some minor adjustments to his approach kind of like what I recommend in this video below plus a few additional add on and I think they could have fixed the shoulder problems.

Now beyond the two points I made above I feel I have major disagreements with what they are recommending.

Now the problem I have is they are using baseball, and tennis, as their go to on correct technique. Volleyball is completely different than baseball and tennis for five very important reasons, especially when coaching youth players.

1 – The ball is moving when you hit it! So your target is not stationary meaning you do contact the ball in the same place every time like tennis, and baseball. (Sweet Spot) For example if you change the tennis serve and you throw a tennis ball from the side and make a kid hit it over their head they are very quickly going to shorten up that arm swing.

2 – Your window of where you need to hit the ball relative to your body is huge compared to baseball or tennis. To hit a ball sharp cross-court from the left side your may go and contact it all the way outside, coming in at an angle where it is facing the ref or the sideline. You would never do this in baseball because you would throw it to 3rd base.

3 – The target of where you are going to hit the ball is dynamic and changing. Also as you get to higher levels the speed of change increases. In tennis and baseball the target is pretty much stationary in front of you. This means you must have the ability to contact the ball in different windows in volleyball relative to dynamic changing target

4 – You are moving when you going to hit. In tennis and baseball are you ever taking a 3 step jump? Are you ever trying to move through sand and then jump?

5 – Power is not the only goal with a good arm swing. High contact, speed, deception and the ability to make shots is also very important. In beach volleyball this is even more critical for success and the arm swings being taught can create significant challenges for success. I have sat in on several coaching sessions with high level coaches and very good AAA Players where they are using this weird funky baseball arm swing and now they are having challenges contacting the ball because of the wind, moving in the sand and the inconsistent set. l

6 – Finally the power generated in baseball and tennis is far greater, you have a weight in your hand (Tennis – Racket, Baseball – Ball) and on contact you do not have something that slows your arm swing or forward momentum, as much as in volleyball. This means volleyball players are not, if taught correctly, not exposed to the extreme needs of shoulder injury prevention that baseball or tennis has.

This means you do not have to go to such extremes to avoid injury especially if it means those changes in technique will have an very negative impact on the players performance.

So let’s Summarize! What does this mean?

Power is not the only goal, rather shot selection, contact point, window, deception and more affect your overall success.

Finally the need to be as conscious of overuse and traumatic stress on the joint is far less in volleyball, than baseball & tennis, if you can correct import areas of technique and build specific muscular power specifically hips and some of the other areas, as well as improve deceleration this will also help avoid injury.

Now let’s look at the technique behind this swings.

New Swing – Slower, range is limited, lower jump – maybe, easier to read, less shots and very difficult to perform on the beach, especially in the wind

I will look to film videos with more experts on the subject of movement patterns in the next few months and post them as they are filmed. Please let me know your thoughts below. Also here are links to some of my favorite videos on spiking:
– Coaching Beach Volleyball Spiking Technique Reviewed with Steve Anderson and Andor Gyulai
– Some Popular vidoe’s I taught on spiking
– Also check out Mike Diehl and Logan Tom on Spiking!

Note in video 1 we talk extensively about things to avoid so as not to be injured when spiking.