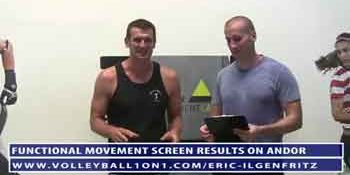 The Functional Movement Screen: “Put simply, the FMS is a ranking and grading system that documents movement patterns that are key to normal function. By screening these patterns, the FMS readily identifies functional limitations and asymmetries. These are issues that can reduce the effects of functional training and physical conditioning and distort body awareness. The FMS generates the Functional Movement Screen Score, which is used to target problems and track progress. This scoring system is directly linked to the most beneficial corrective exercises to restore mechanically sound movement patterns.” – FMS Website

Eric can be reach directly at eric@humanmovementlab.com and 404-247-0100 if you would like a screen performed for yourself. This video was filmed in November 2014 before Andor visited South Africa and discovered South African volleyball politics.