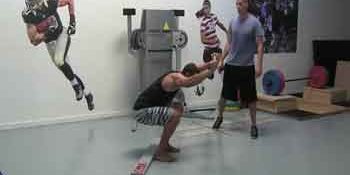 The Functional Movement Screen: “Put simply, the FMS is a ranking and grading system that documents movement patterns that are key to normal function. By screening these patterns, the FMS readily identifies functional limitations and asymmetries. These are issues that can reduce the effects of functional training and physical conditioning and distort body awareness.

The FMS generates the Functional Movement Screen Score, which is used to target problems and track progress. This scoring system is directly linked to the most beneficial corrective exercises to restore mechanically sound movement patterns.

Exercise professionals monitor the FMS score to track progress and to identify those exercises that will be most effective to restore proper movement and build strength in each individual.” – http://www.functionalmovement.com/fms

In this video Eric takes Andor Gyulai through the screen and reveals some major movement functional limitations and asymmetries.

“As a volleyball player I highly encourage before starting a volleyball training routine have an expert perform a Functional Movement Screen. This will identify problems in your musculoskeletal system which if not treated will result in volleyball injuries once your training regiment increases. Additionally often the fastest ways to see significant gains in your strength and power on the volleyball court in by checking off the Sports and Volleyball Training Hierarchy – Mobility then Stability then Strength then Power and finally volleyball specific Skills ” – Andor Gyulai (Owner Volleyball1on1.com)

Below is the 2 video (15 minute screen) on Andor Gyulai. Eric can be reach directly at eric@humanmovementlab.com and 404-247-0100 if you would like a screen performed for yourself.