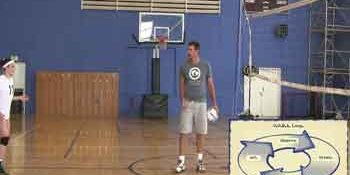 Yet few volleyball coaching models account for how players are taking in stimuli “Reading the Game” and reacting to that stimuli before performing the volleyball skill.

The OODA Loop and my Modern Volleyball Coaching Blueprint is different as your physical orientation is constantly being accounted for in my model while performing the volleyball skill.

Players are taught to constantly evaluate information / stimuli and process that information thus adjusting their physical orientation. As far as I know, no “Reading the Game” coaching model or verbal cues successfully addresses this important issue when coaching.

Additionally because of the OODA Loop, is a circle players are taught to always consider their orientation on the court while the ball is in play? As a coach having the simple cue of “Were you orientated correctly?” is powerful and significantly speeds up the learning curve of young and older players using the Socratic Method.

In this below simple video example on spiking you can quickly appreciate the speed of learning curve and how this player now understand the importance of physical orientation on the court as it relates to spiking a volleyball.