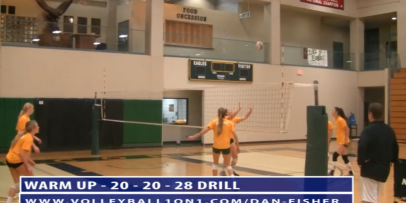 Verbal ques as a coach include ‘tip over the block’ and ‘attack the tip on the way up’!

Note: Dan encourages you to use different numbers for different levels of skill, time in the season and player positions. So for example liberos, setters and outsides are expected to have higher numbers than middles. Also high school players will have lover numbers than college players.

We also did this drill with Dan coaching some high school players. Also we filmed a video where Dan discussed the drill, which is included below.

The video in this drill is:

To see all of Dan Fisher’s 44 videos – Click Here!