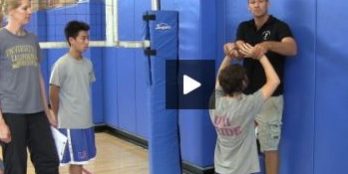 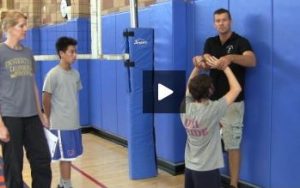 This video features a pre practice setter focused skill building drill Andor likes to run to help setters improve their hands and footwoork technique when setting. This drill was picked up from Chris Austin – 2 Time NCAA Champ Setter from UCI. The setter is the most important player on the court touching the ball almost twice as much as any other player on the court. This drill helps the setter during a time in practice when not much is going on.

Additional Verbal Cues:
– Elbow in line with his ears
– 1 Inch between his index finger and thumb
– Straight line from his elbow to his middle finger
– Cushion with just the wrist, rest arms stay same,
– Finishes, come through with thumb, arms finish extended, still inline with the ears, and the hands finish as they started flat.

Verbal Cues:
– Always lift at the same time
– Always finish square to outside

The setting drill consist of 1 Round for each footwork pattern. Setters move in all 4 directions during each round. So equals 4 – in-system, 4 medium pass footwork, 4 out of system footwork sequences.