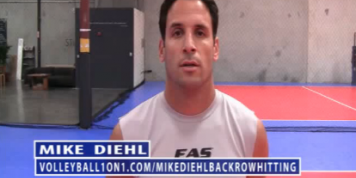 Hi, I’m Mike Diehl, fifteen year indoor volleyball pro including three time league MVP’s, league kill leader and league ace leader. Also Bud 4-man beach tour MVP, kill leader and NCAA champion at UCLA. Today I am going to share my secrets on how to spike a volleyball out of the back row. This video series will basically cover how to hit a volleyball including sets to A, B, C, D, Pipe and Bic!

During my career, particularly the last ten I became extremely proficient spiking the D set out the back row.

For me the first thing you want to consider is your approach and your starting point. Often I see players approaching from inside the court and straight down the line. The problem with this is that you are now not facing the largest part of the court. Also your weight is going down the line so this means you do not have as much power hitting the angle or cross court shot.

Compare this to starting slightly outside the court going towards position five or six, mainly six. Now I can hit the cross court spike with power as well as wait for the ball to come past my arm and hit the line shot with power. The result is more shots and more power with your spike on the volleyball.

Next how are your feet mechanically set when you get ready to jump? See the video…

To get all six videos on volleyball spiking from the back row become a member of volleyball1on1.com.

Hitting a Pipe or Bic Set

When spiking the pipe set I suggest shortening your approach and only taking a two step approach verses a three step approach for a pipe set. I suggest this for a number of reasons including the speed of the pipe set. I know many younger players call it a bic but in Europe the pipe is the bic. This set is fast so you only have time for two steps. This is to fool your opponents so they don’t see you coming.

In terms of your approach I suggest coming in straight so that you have the largest choice of shots as well as your weight and power behind the ball!

Hitting the A and B Set, Position five Attacker

Hitting from position five is becoming a very popular place to attack. What is happening is the outside blocker in position two has to commit more and more on the position four hitter because of the speed of the offense. What this does is leave the defense vulnerable to an attack out of the back row between the outside blocker and the middle blocker. In this video I show you how to hit this set and take advantage of the defense.

Shots when hitting a D

In this video I include some of my favorite shots when spiking a volleyball from the D position.

Next is the chop shot down the line. With this shot the idea is to knock it down in front of the defender. This shot is particularly effective on inside sets where the block has moved with you to the middle of the court thereby giving you six to eight feet of line.

Next is the top spin roll to the middle of the court. Focus on hitting this high over the block and adding top spin.

Shots When Hitting a Pipe

In this video I show you how spike and add shots on a volleyball out of the back row pipe position.

You can hit to the angles in both directions. How this shot is different is that you add spin and cut so the ball drops more. Contact the ball high with the wrist away so it drops in front of the defender.

This is an important area to develop more shots from because a lot of these shots are surprisingly open. The defending block is often not ready for hits from this position.

The first shot or spike, is the cut or chop shot down the line. The key is take it high and add some spin.

The same shot is also very effective hitting angle. With this shot add more wrist action so that it really drops.

To view the other 5 videos on volleyball spiking back row visit volleyball1on1.com and become a member.

Volleyball Passing Communication and Technique with Alan Knipe (2 of 2)
February 9, 2018

Spiking and Serving Technique – Goose Neck, Snap it Like a Pig
February 1, 2018