Volleyball Spiking Footwork The Approach and Hitting with Andor Gyulai 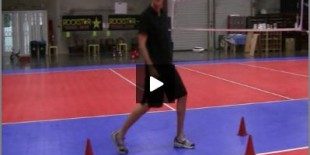 Hi, I am Andor Gyulai, founder of volleyball1on1, NCAA Champ UCLA and 15 year coach! Today I am going to talk about increasing the speed of your approach technique when playing in position 4!
The Pull-Off
The first thing you want to consider in order to increase your speed for your volleyball spiking approach is making sure you are back in a ready position to spike! I know it sounds obvious but think of this, more often than not a volleyball spike approach begin in a transition play, as a result you need to practice pulling off the net in order to get ready to approach with speed. What happens though is most volleyball players and coaches do not focus on incorporating pulling off practice with correct volleyball technique and a effective spiking approach!

The result is often players have not pulled far enough off the net to get ready for and effective full approach or they are still pulling when they need to be approaching forward!
Direction Step
When spiking a volleyball good technique for speed involves the important 3rd to last step or the direction step. One of the biggest mistakes I see as a coach is that players do not use their direction step to take them towards the ball effectively with the result that they during need to use their 2nd to last step or close step they are changing direction which therefore reduces the speed of their approach.

Close Step
The close step is the most important step for generating speed when spiking. Perhaps the biggest problem I see with youth volleyball today and their spiking technique is that they all take these massive 4 and 5 step approaches. I was chatting with Gary Sato (USA U18 Boys Coach) about this and how part of the reason these kids have difficulty with the fast sets is because of this! By doing a drill where your players can only hit off a two step approach what it does is teach them how much speed power and jump they can generate, also it teaches them to go to the ball and hit at their maximum contact height.

Low and Arms
Two of the simplest ways to immediately increase the speed of your approach and jump higher is get low and use your arms! I know its sounds basic but most coaches do not concentrate on it enough and most players are unconscious about its benefits. Every time you or your players approach they should be reminded of this until it happens through Psycho Cybernetics!
Body Transfer
Let me ask you, how many of you have sat in front of a mirror and practice over and over again correct body weight transfer for optimum spiking speed and jump. How good is your forward body weight and speed transfer to upward jump. For most volleyball players it is bad, but this easy to improve technique can have a remarkable, 3-5 inch difference on your jump!

Learn from the Pro’s

Here at volleyball1on1 we have some of the best players and coaches in volleyball. Now more often than not they have some thoughts and instruction on spiking. This may also include speed, fitness and jumping drills. Check out all their video resources. For me some of my favorite instructors on spiking technique is:

Also check out instructor Mike Diehl! I have seen few people that impress me as much when spiking as this guy! Wow is a total understatement!