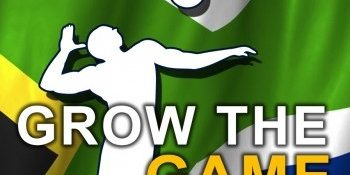 So I am excited to be in South Africa training after a very long time away. We are living in Cape Town in the city of Noordhoek and it is stunning. My daily commute takes me over Chapman’s Peak to Camps bay and it is by far the most beautiful place I have ever traveled. See above! 🙂

My partner Leslie Naidoo has allot of potential and is an incredible athlete / person. At about 6’5 he jumps like crazy and I plan on him doing most of the blocking. (I think you see why in the pic!) This is a welcome change and I know for us to compete at the international level I will need to play defense.

So this being a volleyball website I thought I would start off with the most important things to work on when starting a new 2 person beach volleyball partnership as I see it. I am going through it now with Leslie and it has been interesting evaluating it.

Spacing Concepts and Circle of Trust
– So I started practice with Stein Metzgers spacing concepts and circle of trust. Stein is one of the best coaches I have ever worked with on the beach and I was fortunate to witness him train the Israeli Beach Team.
– For many teams they do not not start with this foundational area. Also coming to South Africa volleyball coaching is non existent relative to what I have witnessed in USA, Europe, South America and Asia. So many of the concepts I had to teach my partner as if he was a beginner.
– This spacing issue really came into play during transition and serves that move middle or line. I found he was not for example creating space for a ball I called early and was passing in the middle or coming with me when I passed the line. Also on transition easy free balls which he passed on the line he would force the ball all the way back to the middle and then call for an outside set. We changed this to him passing the ball forward and keeping the ball in front of him and in the middle of us.

L vs I Offense and Passing the Ball Forward not to Center of Court
– So one of the best coaches I have ever worked with is Eduardo “Anjinho” Bacil. Anjinho played with the best and he always talks about Scott Ayakatubby. Ack would pass the ball low and straight in front of him to set up his offense and Anjinho would have to run all the way across the court to set him. The point is you pass to set up your offense and not to set up your setter.
– If the pass is forward and in front of you, (Left Side Player – Just right of your right leg and Left Side Player – Just Left of your Left Leg) this give you the best options on the court.
Attack From The Middle or Outside.
– Run your offense through the middle or out of the outside, not in between. Again Anjinho with Steve Anderson building on this concept.
Here is a Video I did on the topic…

Setting – Shoulders Square to Your Target
– The next problem Leslie has been working on is squareing your shoulders to your target. This is something that was really brought home to me when I filmed Sinjin Smith and Stein Metzger. Two of the best beach setters in the world and interestingly both brought it up for different reasons. Sinjin Smith – “You square your shoulders so your partner knows where you are setting.” Stein Metzger – “By facing your target it makes it easy to direct the ball where you want it to go.”

So I will let your know more next week and add some more pics. Thanks for reading.

To read how the full week of practice unfolded in South Africa and too learn what I think is important what to focus on as a new beach volleyball partnership, click the link!

Tom Bayer
Go to Top
Call Now
We use cookies to ensure that we give you the best experience on our website. If you continue to use this site we will assume that you are happy with it.OkPrivacy policy