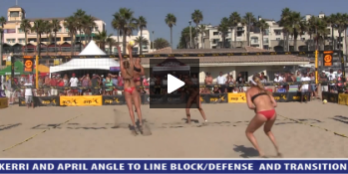 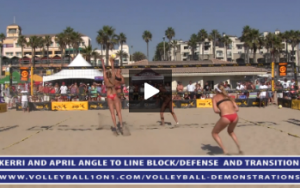 What you should try and observe in this 7 angle demonstration:
– April start with her block in a neutral position in front of the hitter able to block both angle and line.
– Kerri starts in a neutral position in the middle of the court thereby able to move defensively either line or angle.
– Once the hitter looks back up at the set, both players move to cover their respected areas: April blocking line, Kerri playing defense in the angle.
– Kerri shuffle steps into the angle defense position, on the spikers contact with the ball her legs are loaded (See coaching on Split-Step Stretch Shortening Cycle) and he body is facing the hitter. She is also not stiff, arms look relaxed (able to absorb impact)
– Because the ball is touched on the block, Kerri sets April, notice the spacing and the Kerri looks to set April between the two of them. Key point is the spacing and setting in middle of them when in trouble or like on this broken play.
– Notice the big gather and look by April on the transition hit.

Click the links for more volleyball demonstrations with Sean Rosenthal and Phil Dalhausser.