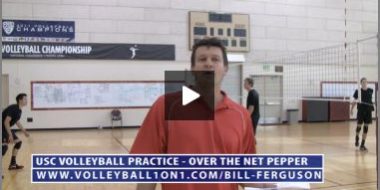 Over the Net Pepper Volleyball Drill has become a very popular drill which we are seeing in a lot of practices all the way up to the USA National Team. The drill focuses on both lower ball control (Passing / Setting) and upper ball control (spiking / tipping / shooting with control).

Goal of the drill is a lot touches for all the players so that players, especially middles can be trusted when they are brought in to play in the back row.

Additionally – The focus on ball control stems from the belief that the team with the best ball control, controls the rally as they make less mistakes and get less frustrated, thus scoring more points.

The switching during the rally from area 5 to area 1 for the teams was a function on re-balance and having the players be able to move and get rebalanced and reset for the next ball. (Reset – Idea that you are ready to dig anything!)

We have also included the video from the conversation in the office when Bill and Andor discuss the drill in detail.

To see all of Bill Ferguson’s 65 Videos – Click Here!