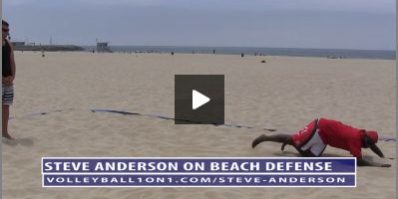 This is a 5 video beach volleyball defense series with Steve Anderson. 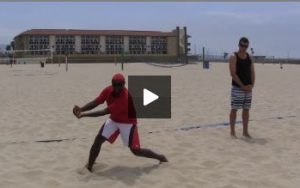 In video 1 of Beach Volleyball Defense with Steve Anderson, Steve and Andor (Volleyball1on1.com Owner) demonstrate good defense technique for running down the line and angle or cut shots. This video shows footwork and technique from different filming angles and more. This video is a great demo video for players of all ages and skill levels. 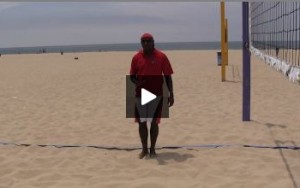 Your starting position is the most important part of beach volleyball defense. If you start in the wrong spot often you will be moving when the ball is hit and most good beach defenders agree you should try and avoid this as much as possible. What Steve does in this video that most coaches do not show is he breaks down the court and changes the size!
For example:
– Roles of the blocker
– What the hitter can possibly hit so long as the ball is not tight

Steve also goes over what is the defenders first priority namely the power ball around the block vs. the line and cut shots. 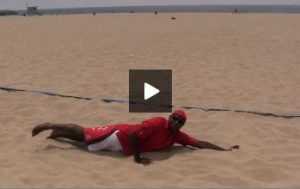 In this video Steve gets very detailed on correct footwork for the cut shot and the line shot.
For the line shot:
– He breaks the court down and uses some great visual cues to make the court smaller
– Also he shows some interesting, not previously shared points on weight and balance for maximizing movement speed once you know where the ball is going yet still giving you the opportunity to change directions if needed.

For the line shot Steve coaches a 3 step movement technique. This is different than some of the other coaches on Volleyball1on1.com and he explains this technique in detail. 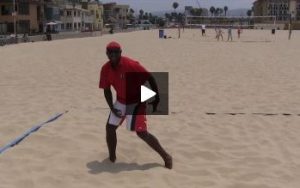 This videos offers great tips including:
– Be stopped when the ball is hit
– Don’t guess, wait to move
– Don’t cross-over until you know where you are going
– Weight transfer onto your outer foot in the direction you think you will be going
– Push the hips high and back to create distance off the net on a cut shot so you create space for an approach
– And more… 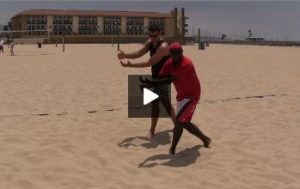 The final video features an exercise Steve does to help players rapidly learn the skill of playing defense. The exercise is called shadowing and this skill really helps with motor skill learning as it engages all the sense when teaching players.