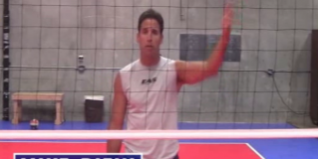 You can view all of the videos on volleyball blocking by being a member at volleyball1on1.com.

Swing Blocking – The swing block has become extremely popular as a block as the speed of the offense has increased often there is only one blocker up in the block. The most important thing you want to always do when swing blocking is plant your outside foot so that you go up and do not drift outside the court. Planting your outside foot is the most important key on how to block a volleyball.

Position 2, Lining Up and Hands – When blocking a volleyball in position two the first thing like all blocking is set yourself in front of your opponents hitting shoulder.

Transition Blocking on the Outside – In transition a lot of blockers make a mistake that is easy to avoid and should never happen.

What they do is they have time but still they start inside and then move outside to pick up the hitter to block. What you should do is start at the antenna and then move in so that you are always outside the ball with your right hand on the block and therefore do not get tooled.

Go Up, Attack the Ball – Perhaps one of the most important lessons I ever learned with blocking was from a Bulgarian world renowned middle blocker who said, “Mike, go up and attack the ball!” What this does is force you to press over the net and go and try to grab the ball.

I hope you enjoyed my volleybal video on how to block a volleyball, indoor techniques.

Don’t forget to check out the rest of our beach volleyball blocking at volleyball1on1.com