So this past week Reid Priddy (USA Volleyball Indoor Olympian Standout) did a Vlog (Video Blog) on a questions I asked him about vision. The question:

“Do you have a vision routine for hitting?”

His answer is here:

This video is interesting on a number of fronts but most interesting as it relates to an idea I call A.V.C.Ex.

Pronounced “Ave Sex” for older players thus making it easier to remember, it is an vision routine top athletes use to improve their performance. Most interesting is Reid Priddy does allot of this naturally as I have never explained this concept to him nor do I think anyone is really teaching this concept in volleyball.

A.V.C.Ex is an acronym for Analyze, Visualize, Center, Execute.

In this video you will hear how Reid does this naturally as a super star player.

Analyze – This is the first step. In this step the player focuses on the information that is important to the next play.

For example: Reid Said – “On serve receive, “Who’s serving, where they serving from, do I have any history, based upon what this server has done before, do I think he is going to try do. Then I look at who is going to try block me, do I have the setter, opposite, big blocker, small blocker, I notice what the setter is calling the middle, is the middle going to come gap into my zone…”

Notice how his focus is only on what is important towards successfully completing the next play.

To often younger or inexperienced player are focused on things that do not affect the next play. Most often they are analyzing or observing things that do not matter! When you consider this relative to Volleyball1on1 ideas on “Reading the Game” specifically the OODA Loop – Stage 1 – Observation, players often take in information with their eyes that does not matter thus slowing their ability to process the play and thus making the ball and game speed increase.

Diagram below! (Left side) Notice they observe more, resulting in more to orientate or process, resulting in a tougher decision thus slowing their action of performing the volleyball skill. Be that, passing, blocking, setting, defense, attaching or serving. 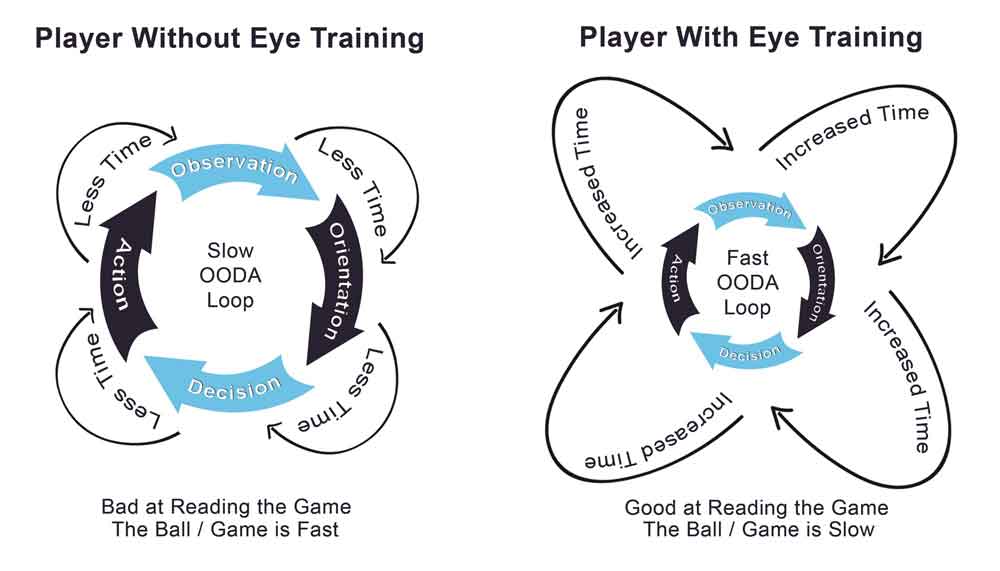 By contrast, great players like Reid by do the opposite. (Right Side) They only “Analyze / Observe” that which is important to the next play which is less than most others players. Because they Observe less, they have increased time to Orientate and process what they saw. This focused vision increases the speed of their ability to make decisions which then increases the speed at which they perform a volleyball skill like passing or spiking thus slowing the ball / game down and making him one of the best players in the world.

Coaches, ask your players or look at what they are focused on or seeing before serve receive and you will be shocked by their answers and what you notice. Great coaches teach players to only analyze that which is important to successfully completing the next play!

Visualize – Visualization is the process of mentally picturing the play before it happens. The value of this is that your brain cannot tell the difference between a mental rehearsal and the real thing. Now Reid does not mention himself visualizing the play happening successfully before he does it, however you can hear in his language he is considering the “History” of his opponents last actions on the court.

Reid describes himself as: “I am processing all of this stuff before the play happens. So I already have an idea of what could potentially take place.”

John Boyd arguable the United States greatest fighter pilot who invented the OODA Loop describes what Reid is doing as creating a “Mental Models.” John goes on to say that by using “Mental Models” this increases your ability to process during the Orientation stage of the OODA Loop thus increasing your speed to travel through a full loop thus increasing your ability to read fast and perform a volleyball skill successfully!

Coaches, ask your players if they are thinking about the servers, setter or hitters history before each play, most would answer no. Great coaches teach players to make this a priority!

Center – This is a process where player visually switch between two points in order to get in the visual sensory mode which is a precursor to “The Zone.” Now Reid does not do this, however you will hear him talk about watching the ball and getting back on the play! It is important to understand everything in volleyball starts and ends with what you see visually! Like the OODA Loop it starts and ends with observation or your vision and what you see.

Execute – This is where a player is focused on the here and now.

Reid describes it as – “It was important for me not to have any predetermined shot. I could know my outs, But I did not want to predetermine my shot I want to make!”

Notice how Reid is only focused on the here and now in execution.

Coaches, many young players are not focused enough during the execution on specifically the ball. The idea of getting back on the ball, even when “Reading the Game” where you are taking in information from visual cues your opponent is doing, is critical! Notice how Reid focus is back on the ball when needed! The ability to get back on the ball also allows you to slow the ball down using specific vision techniques we teach at Volleyball1on1.

As a coach I believe A.V.C.Ex. is a powerful way to help younger players focus and execute in every play. As a player myself I find this dramatically increases my consistency and helps me stay focused in a game. Let me know your thoughts and questions below.

Also Reid is a great player now starting to to delve into the coaching realm. I encourage you all to check out his website at http://reidpriddy.com/