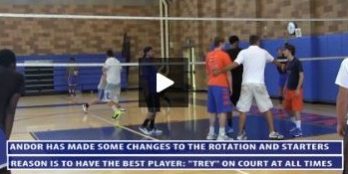 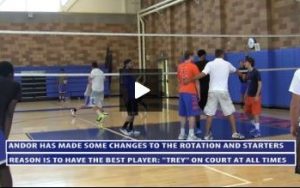 In this video Andor takes over the drill and makes changes immediately. Andor’s coaching style this early in the practice is based upon the needs that he sees. He is really on top of the kids with a ton of verbal cues and corrections. Additionally Andor believes in “Raising the expectations” of everyone on the court and putting players who want to and can perform in a position to do that.

In this video Andor has seen some talent in Trey and decides to move the rotations so Trey is outside vs. middle. Trey is also the leader of the group so Andor put pressure on him to perform and puts him in a situation to perform. Because Andor controls the coaching environment (the court) he can control free balls and can influence the sets Trey gets. This is an opportunity for the leader to step up which Trey does before the team.