You are here:
VolleyballVolleyball General

What is volleyball, Volleyball is a sports consisting of two teams of 2, 4 or 6 players, where they compete over a net by trying to force the ball down on the oppositions court under a set of rules. Today with the phenomenal growth and popularity of the sport Volleyball is arguably one of if not the most popular participant sport in the world.


Volleyball history is extensive with the game originally known as Mintonette. Mintonette was started by William G Morgan to be played as an alternative to the more physical basketball. The idea was to incorporate features of handball and tennis into a sport that could be played by older members of the YMCA where William Morgan was a physical education director. Click here for more history of volleyball game. 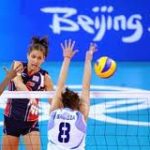 Here are some fun facts on volleyball: