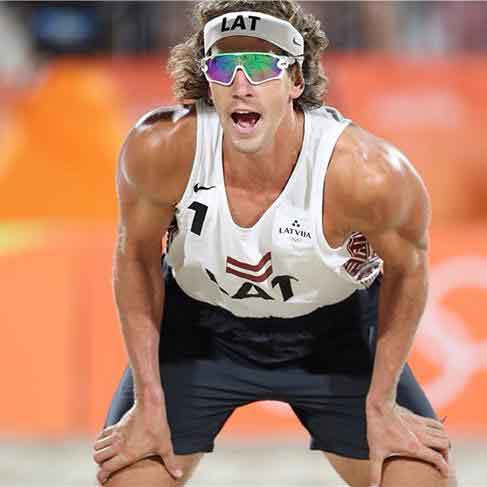 This week I was at the Long Beach FIVB World Championships and I had a chance to talk with “The Lion” Aleksandrs Samoilovs from Latvia who is part of the #1 Ranked beach men’s team in the world.  During our conversation I got to ask him a few things including why he has in my opinion such an easy serve.

Now having just met him, I was impressed he didn’t just laugh or punch me, which speaks highly of his incredible character, instead he took the time to thoughtfully answer me. Now for all you coaches and players out there, these are real words of wisdom coming from the #1 men’s team in the world in 2015 and 2016.

“Although I only average maybe 1 ace per set, my serve is always in and consistent! What this does is gives may partner (Janus Smedin) the opportunity to be aggressive with his serve and go for aces! Also if he misses, then I miss, then he misses, now we are in trouble and our opponent has 3 points. Also the stats show historically when I am serving we are one of the top 5 scoring teams in the world off my serve so my job is to get it in and get points.”

How many players on your high school team don’t know there role on the team when at the service line? “Is your job as a player to serve tough or be focused on just getting it in?”

I feel it is important for each player to know and really understand their role and then commit and be accountable to that role to the team.

As a coach and player we need to understand we can’t all serve the ball lights out. But we can create an environment where we play the odds as well as set up our team mates who are better servers.

Final thought: “I feel blessed to play, coach and be a fan of volleyball because of the people involved with volleyball. Also if you see me shouting and cheering Latvia, you know why. They are real, entertaining, and champions on and off the court!”