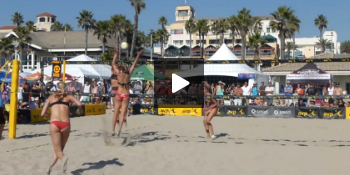 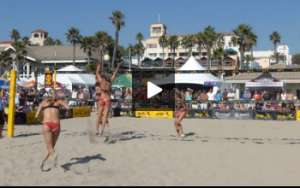 Kerri Walsh Jennings and April Ross are featured in this demonstration with Kerri Serving and playing line defense and April blocking Angle. Kerri and April are two of the top beach players in the world and this was their first tournament playing together.

What you should try and observe in this 7 angle demonstration:
– Notice Aprils position on the block. She never makes a clear move she is going one way or the other till the end.
– Notice Aprils blocking footwork and move to block angle at the last minute.
– Notice Kerri middle defensive position and how she moves towards the angle at the last possible moment. Even the opposition setter calls the wrong location because the move is so late in coming.