The history of beach volleyball is long and storied and most will agree that the sports origins started in Santa Monica and Southern California. What many today would say is the Mecca of both Beach and Indoor Volleyball.

The city of Santa Monica in 1920 added new jetties in order to create a larger area for public entertainment and amusement. As a result of this extra space, public volleyball nets as well as private beach club nets sprouted, up and down the coast thereby changing the course of volleyball history. At the time most people played six-on-six volleyball and the modern concept of two-on-two beach volleyball did not start until the summer of 1930.  That summer Paul “Pablo” Johnson, an indoor player from Santa Monica Athletic Club, while waiting for the other players to show up for a six-on-six game suggested instead the modern two-on-two concept of playing beach volleyball. Today most competitions are only at the two-on-two level. There was a short period of time where there was a very competitive four-on-four professional volleyball tour called the Bud Light 4 Man Tour, but the model did not sustain itself and the sport has since moved back to recreational six-on-six and most competitive play being two-on-two.

The History of Beach Volleyball in Europe

By the late 20’s and early 30’s beach volleyball became popular in parts of Europe including France, Bulgaria, Czechoslovakia and Latvia. By the 1940’s competitive tournaments were held more frequently with the first official two-man tournament held at State Beach in Santa Monica by Volleyball Hall of Famer, Bernie Holtzman. Bernie described volleyball as such; [quote]”Volleyball is God’s gift to the beach bum! – Bernie Holtzman”[/quote] 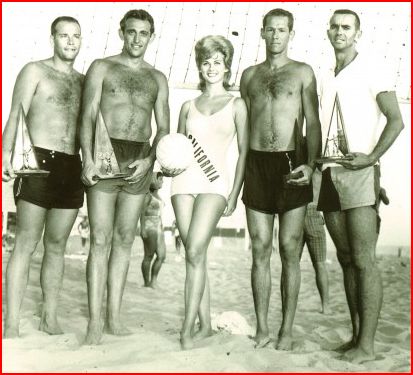 By the 1950’s, State Beach in Santa Monica, Santa Barbara, Corona Del Mar, Laguna and San Diego all help regular tournaments yearly. Beach Volleyball had arrived and become part of the Southern California Beach Culture. It was during this time the ever popular and ever controversial beauty contest became a part of the official program. Even today it is a debated topic on the FIVB tour with the dancers and in its peak the AVP removed its beauty contest forever changing the history of beach volleyball.

By the 1960’s competitive volleyball tournaments are held at 13 of the top beaches in California including Newport Beach, Rosecrans, Sorrento Beach, Marine Street, Santa Cruz, Santa Barbara, Will Rogers State Beach, Manhattan Beach, Corona del Mar, Laguna Beach, San Diego, Mission Beach, and Laguna Niguel. In 1960 the first Manhattan Beach Open takes place forever changing the history of beach volleyball. This annual tournament is to beach volleyball what Wimbledon is to tennis with all winners getting their names engraved into the Manhattan Beach Pier. Beach Volleyball was becoming a main stream sport in California and was quickly getting the attention of the rest of the country.

Even President Kennedy attends the first official Beach Volleyball tournament at Sorrento Beach in the 1960’s. Rumor has it Gene Selznick (Beach Volleyballs First Super Star) was dating Marilyn Monroe and Jack was a little jealous.

Gene Selznick – A Tribute to a Legend!

Just a year later Olympia Beer sponsored Olympia World Championship of Beach Volleyball, staged on Labor Day weekend, 1976, at Will Rogers State Beach in Pacific Palisades, California. It is estimated that close to 30,000 spectators enjoy the competition with a $5,000 first prize won by Jim Menges and Greg Lee. In 1978 Jose Cuervo sponsored its first event. Their involvement in the sport would grow and the positive impact on the growth of the sport was notable!

By 1984’s the Pro Beach Volleyball Tour had grown significantly to 16 events and a total prize money of over $300,000. It was during this time that Karch Kiraly made his impact felt on the sport and helped catapult the sport forward to national and global recognition.

Karch Kiraly’s Impact on the History of Beach Volleyball

In 1984 the summer Olympics were held in Los Angeles. Karch had graduated from UCLA just 2 years earlier and joined the USA National Team with coach Doug Beal. Recognized by many as the best player in the world Karch Kiraly’s experience on the beach would forever change the history of volleyball. Doug Beal the USA head coach introduced a new system to indoor volleyball based upon many of the attributes needed for success in beach volleyball. The concept known as “two passer” also known as “swing hitting system” would revolutionize the indoor game and make Karch the Hero of the 1984 Olympics. Playing in front of a home crowd of 12,000 spectators the Karch and the US dominated and put volleyball on the map in southern California.

Now volleyball had a hero, a name people could follow to keep them engaged in the sport. Also this year, 1984, the AVP was formed, the Association of Volleyball Professionals. This juggernaut, the AVP would forever change the game and help create an environment that would grow volleyball in Southern California.

Below is a video from perhaps one of the greatest beach volleyball matches in Olympic Volleyball history, involved Sinjin Smith / Karl Henkel against Karch Kiraly / Kent Steffes.

The history of beach volleyball is defined by great matches, great rivalries and great volleyball teams. A few of my favorite include:

Karch Kiraly and Kent Steffes – At their peak the greatest men’s team to play the sport! Combined earning of over $5 million dollars.

Misty May and Kerri Walsh – 3 Gold Medals later this duo will forever be the greatest female partnership in the history of the sport.

Randy Stocklos and Sinjin Smith – These two pioneer beach volleyball in the United States and Globally. Sinjin forever will be the greatest ambasodor the sport has ever known. His influence on the FIVB and speeding up the adoption of beach volleyball forever change volleyball history.

Todd Rogers and Phil Dalhausser – The Professor and the Thin Beast had changed the sport in ways few others have yet noticed. Todd has forever redefined how you play right side on the beach by changing how players approach to spike as well as changing the very nature of effective side out. Phil has increased the specializtion of players and the need for a tall blocker and a smaller defender. (Tell me Casey Patterson did not get a little inspired to work with Ryan Doherty from Todd work with Phil?)

Todd and Phil the best players in the modern history of beach volleyball! They were so good they made the sport boring because they always won!

The history of beach volleyball will continue to be defined by amazing athletes and incredible stars. The question is who will they be?