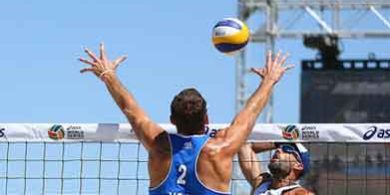 This post contains a 2 part video evaluation of Ryan Doherty blocking verses the great Ricardo Santos (Gold and Silver Medal) and Alison Cerutti (Silver Medal). I love Ryan and what he does for the sport however he is making some major, easy to correct blocking mistakes and it is time to fix them before the Olympics! I would love to see him and John bring home a medal.

Some points discussed in this video series:

1) Some major problems Ryan has when “Reading the Game” because of his visual snapshots during the “Orientation Stage” of the OODA Loop. I think this is a function of also never having played indoor and not knowing: “Ball, Setter, Ball, Hitter”.
2) Some major problems Ryan has with both his physical (On the Court) and visual “Orientation” when watching his opponents attack / spike. Keep in mind this “Orientation Stage” is the most important part of the OODA Loop and performing any volleyball skill and Ryan is really missing it. I feel sad for his opponents when this changes!
3) How Ricardo and Alison by comparison physically “Orientate” on the court so that they are in the opponents “Meat of the Court” or “Hitting Line”
4) How Ricardo and Alison by comparison make it far more difficult to read their block.
5) How Ricardo and Alison make better moves with their hands following important beach blocking principals.
6) How Ryan should change the call of “Three” and “Four” blocks when the opponent is out of system.
7) How Other top blockers Hands start narrow and go wide while Ryan starts wide and goes narrow.

To see more videos and articles on the verbal cues and coaching philosophies behind the OODA Loop – Click Here!