Karch Kiraly – The Greatest Player in the History of Volleyball

Volleyball Legend Karch Kiraly and his Impact on the Sport 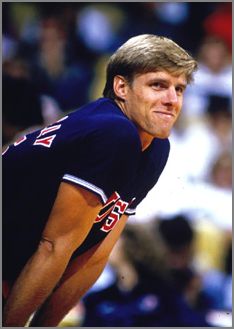 Karch Kiraly – Karch was born November 3, 1960 in Jackson, Michigan. Laszlo Kiraly, his father played for the Hungarian national volleyball team before immigrating to the United States. His real name is Charles Frederick Kiraly, Karch is derived from the Hungarian “Karcsi” which translated means Charlie. Kiraly mean King in Hungarian.

Karch Kiraly is the greatest volleyball player in the history of the sport.

He is to volleyball what Wilt Chamberlain was to basketball, Pele is to Soccer, Tiger Woods is to Golf and Babe Ruth is to Baseball. What makes Karch Kiraly maybe the greatest athlete in sport ever is that he essentially did it in two sports namely beach volleyball and indoor volleyball. Two completely different sports where only a handful of players have had success in both, let alone win and win consistently.

Look today at the best players in the world for beach volleyball, very few if any have had major success playing indoor volleyball meaning winning a gold medal. Most played in college or for a brief time played on the National team or overseas in a Pro Tour. But none of the top beach players today dominated indoor like Karch Kiraly being recognized as the best indoor player in the world.

Karch started his volleyball Career as CIF Champions 1978 at San Clemente High School. He graduated third in his class from high school with a 3.96 grade-point average.

In 1979 he transferred to UCLA under the tutelage of the Legendary Head Coach Al Scates to make volleyball history. Al has said many great things about Karch, a few include:

“The first time I saw Karch Kiraly in our gym I was standing there on the sideline and next minute this kid dives for this ball and digs it… It was not during a play, not during a game nothing. This kid just had a passion for the game like nothing I have ever seen!”

“Karch was not a great hitter his first year at UCLA, (Al smiles) we used to hide him and no one new the truth. By his sophomore year he was a great hitter. But as a freshman I have never seen a person defend like him. He could read the play and see what people were going to do. I used to let him roam on Defense. To this day he is the only guy I have ever let do this! I let him choose to play defense where ever he wanted. (Al says with a big grin.)

“I have never seen anyone shag volleyballs like Karch Kiraly, whatever he did, he did at 100%!”


1979 UCLA won the NCAA Championship. It was the first undefeated season in NCAA volleyball history!

1980 UCLA lost in the NCAA finals. What most don’t know is that the entire teams had terrible food poisoning and were throwing up before and during the match. At the end of the match when UCLA lost Karch Kiraly was so upset he tore down the net. It’s a well-known fact that Karch hates to lose and in his younger days was prone to acts of anger when this occasionally happened!

1981 UCLA Won the NCAA Championship again and he was named Most Outstanding Player.

1982 UCLA again won the NCAA Championship and again he was named Most Outstanding Player.

I have included below some incredible videos by Al Scates talking about his teams from 79-82. These videos include “The Best Volleyball Story I have ever Heard! – Involves Snake charmers and Karch, 🙂 and Al stories about what many recognized as the best team to ever compete in Men’s NCAA College Volleyball!

Al Scates Video 2 – The Best Volleyball Story Ever! Involves Karch and a Snake! 🙂 Also Al talks about Randy Stocklos setting and food poising in the NCAA Finals in 1980.


Karch also returned to UCLA after his eligibility was up, Karch was the assistant coach at UCLA when they won another NCAA championship.

Karch Kiraly started playing for the National team in 1980 while still at UCLA. Al Scates always jokes that before he left in 1982 UCLA was better than the National Team. There is a trophy in the UCLA cabinet and hall of fame to prove this true. In the early 80’s UCLA traveled to Asia to represent the United States in an international competition against other countries national teams. UCLA went on to win the tournament and it was such a surprise that the tournament organizes before the finals put the favorites on the front of the trophy and the UCLA on the back thinking UCLA had no chance of winning. To everyone’s surprise except UCLA they did win and today there is a trophy with UCLA name on the back winning! Today that trophy can be seen in the hall of fame, it has a big tiger on it and it faces backwards! J

We included an interview with Al Scates where he discusses Karch Kiraly and other great UCLA athletes.

From UCLA Karch went on to play and establish the USA Men’s National Team with Doug Beal. At the time the program barely excited and was totally underfunded. Keep in mind the US had not played in the World Championships since 1966 and the Olympics since 1968. Most American volleyball players only played in semi-pro leagues or on the beach. The UCLA Program, Karch, Doug and a few others were the catalyst for something greater, something that would make Southern California the mecca of all volleyball globally, not just beach.

Doug Beal the then USA National Team Coach had a vision! His new star Karch was the key and with him on the squad he introduced the “two passer” also known as “swing hitting system”. This system revolutionized the game in that it allowed specialization of players to play specific positions as well as have specific roles and responsibilities. For many today this system seems obvious but until you had a player with the ability of Karch who is an incredible passer who can move after he passes and get all the way outside to spike, it was not obvious. Karch in many ways was like breaking the 4 minute mile to indoor volleyball at the time, until you saw someone like him do it and dominate at it, it seems impossible.

How did this change happen? Something you must consider is Karch was winning on the beach at the highest level playing two-man volleyball since he was 19 playing in CBVA Tournaments. Since playing as a kid on the beaches of Southern California Karch Kiraly would pass and move or swing outside to spike, this was also in the days when the beach court was the same size as the indoor court, 9 by 9 meters. The incredible skill he picked up which at the time was only possible in Southern California because of the beach volleyball scene set the tone to change the game in Doug Beal’s new system.  Another way to think of it was Karch was such a great passer that you wanted him receiving serve as much as possible. So the Swing Hitter System was created!

The next step to making Southern California the Mecca of Volleyball was the Olympics in 1984 and the indoor volleyball being held in the Long Beach Arena. In 1984 very few people cared about indoor volleyball in the United States. Most if any played beach volleyball. With the boycott of the USSR this reduced the competition to just 10 teams.

Of the contenders, the United States (24 Match win streak), Brazil (1982 World Champions / 1983 Pan Am Champions) Japan (Asia Champions) were the top teams. Cuba, Poland, Bulgaria, and the Soviet Union (Defending Champions) did not compete and were replaced by China, Italy, Korea, and Tunisia.

With the win and glory, it did not take long before every mother and farther who had been playing beach their whole started encouraging their kids to play indoor volleyball. Along with new volleyball programs in almost every high school Southern California emerged as the Mecca of Volleyball.

In 1988 along with “Big Red,” Steve Timmons at Opposite and Eric Sato at defensive specialist Karch Kiraly and the US went on to win gold again in Seoul Korea. The quality of indoor volleyball at this Olympics was incredible. With the USSR boycotting 1984 Olympics they were out to get revenge. The Russians were well prepared and played with a chip on their shoulders.

Looking back at the video of their game in the Olympic finals it is one of the best indoor matches ever played. There is one rally during the match where Karch “Six packs” a Russian, meaning he hits a ball down the line from the outside position and tags the defender in position 1 in the head. Somehow the Russians get the ball back over the net and the US sets Steve Timmons a D set out the back row where he tags another Russian in the face in the same rally. This was the tone of the match with the Russians relentless on defense, but in the end just could not match the fire power of Team Captain Karch, recognized as the best player in the world and his team of talented young guns.

The score was follows: USSR won the first set, 15-13. But after this the US won the next 3 sets and went on to be the first team with repeat gold medals since the Soviet Union in 1964-1968. Marv Dunphy coached this team and later went on to coach the Pepperdine Men’s Volleyball Program.

After the 1988 Seoul Korea Olympics, Karch retired from the USA national team to compete in the Pro Italian League for team Messaggero Ravenna with USA teammate Steve Timmons. The two of them each received the highest paid indoor contract ever up till this stage each earning $1 million dollars a year for their respective contract.

Along with Indoor Volleyball, Karch is the most successful volleyball player in Beach Volleyball History. During the 4 decades he played he won at least 1 tournament in the 24 of 28 seasons he played. His greatest accomplishment is perhaps the one he is least known for, having finished in domestic US tournaments lower than ninth only four times as well as finishing in the semifinals over 80% of the time he played. Keep in mind this includes a beach volleyball career that continued all the way to the age of 44, unheard of in almost any sport, let alone the physically demanding sport of beach volleyball.

Karch won at 148 beach volleyball events with 13 different partners. In 1996 he won the Gold medal with partner Kent Steffes at the Atlanta Olympics.

Atlanta 1996 – Inaugural Event of Beach Volleyball at the Olympics

The 1996 Atlanta Olympics was the first time Beach Volleyball was represented at the Olympic Games and 3 teams made it in to represent the United States. Sinjin Smith and partner Karl Henkel qualified via the FIVB tour and two teams qualified domestically in one tournament winner take all. The competition at the domestic tournament was fierce and included many of the legends of beach volleyball including, with event partner:

After the tournament was finished and all settled, Karch Kiraly/Kent Steffes, and Mike Dodd/Mike Whitmarsh qualified for the Olympics. At the time some were upset that Sinjin Smith and Carl Henkel had qualified via the FIVB tour which many domestic players on the AVP Tour did not feel was as competitive. This would later result in an epic Olympic match that would prove to those “FIVB Doubters” just how far International competition had come.

Below is the match between Karch/Kent vs. Sinjin and Carl.

At the 2011 AVCA convention he taught a workshop of volleyball mapping where he discussed that often players are looking at the wrong thing in order to have success. In the video above Andor Gyulai and Bill Harrison discuss some of his points!

We look forward to see Karch Kiraly having as much success with Coaching as he did as a player.