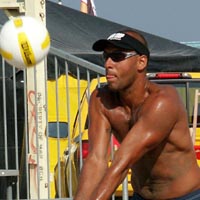 He was the first foreign born player to win an AVP event. Stein Metzger gives him credit for teaching what is now known as the Steino Pokey Shot!

His full name is Eduardo Jorge Bacil Filho, and is nicknamed Anjinho, which means “Little Angel” in Portuguese. A native of Copacabana Beach, Rio de Janeiro, Brazil he has three children; Reagan, Jackson and Dominique. He enjoys soccer, surfing, listening to music (favorite group is Sublime), and having “churrasco” which means BBQ in Portuguese with friends. His favorite movie is Gladiator and favorite TV show is CSI.