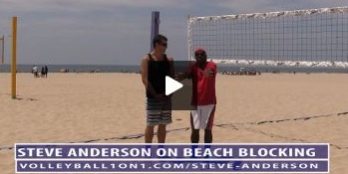 This is a full 5 video series with Olympics Gold Medal Coach and Head Coach of Beach Volleyball Canada, Steve Anderson. This article will go through all the most important concepts for blocking in beach volleyball including offering a demonstration on blocking. This article is good for both male and female players of all skill levels. 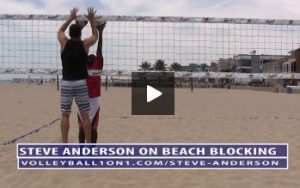 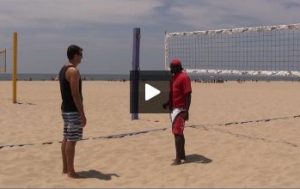 Beach Volleyball Blocking with Steve Anderson – Video 2 Mindset:
Video 2 of Beach Volleyball Blocking with Steve Anderson focuses on the blockers “Mindset” when at the net blocking. Most blockers because of indoor background playing volleyball or misunderstanding take the role of a “blocker mindset” when blocking a volleyball. This is the wrong attitude and mindset and in this video Steve uses a powerful exercise that can be used on players of all ages and skill levels to immediately improve ones blocking.

We have heard repeatedly by coaches of all levels the effectiveness of this exercise for both beach and indoor volleyball. This exercise is a must when teaching volleyball and is almost most certainly guaranteed to improve your individual or team blocking. 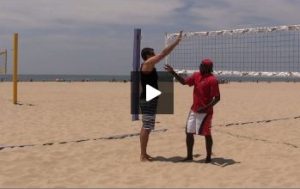 Beach Volleyball Blocking with Steve Anderson – Video 3 Arm Technique:
In this video Steve gets detailed about beach volleyball blocking hand and arm technique. Steve describes blocking as “Controlling the Net!” And with that in mind you need to claim some territory on their side of the net, meaning how far can you get over the net, penetrate and put your hands around the ball.

So starting with this foundation Steve gets detailed on what is good blocking technique. Points include:
– Hand and thumb position and the “W” Shape
– Starting position on hands next to the shoulders
– Elbows on the side of the body
– Go directly to the ball
– Releasing the shoulders so that they are in front so that you make a “Roof shape” with your arms for blocking 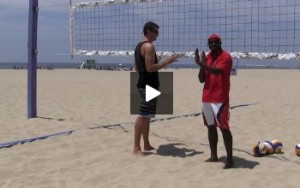 Beach Volleyball Blocking with Steve Anderson – Video 4 Body Position
This video discussed body positioning for beach volleyball blocking. In this video Steve discusses the most important points on where the blocker should be position on the net as the play develops. Points include:
– Split footwork in case you need to pull
– Fronting the passer
– If you likely to block get your feet parallel to the net and from the split footwork
– Outside hand facing into the court
– Outside hand on the outside of the ball
– Also hand work moving together to seal the net 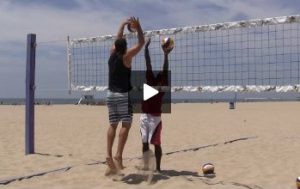 Beach Volleyball Blocking with Steve Anderson – Video 5 Play On the Ball Video 5 on Beach Volleyball Blocking with Steve Anderson is about “Play On the Ball”. In this video Steve shares a great volleyball blocking drill he uses to teach effective beach blocking. This drill is good for both male and female players of all skill levels. Steve uses this drill even with the Canadian Men’s National team.