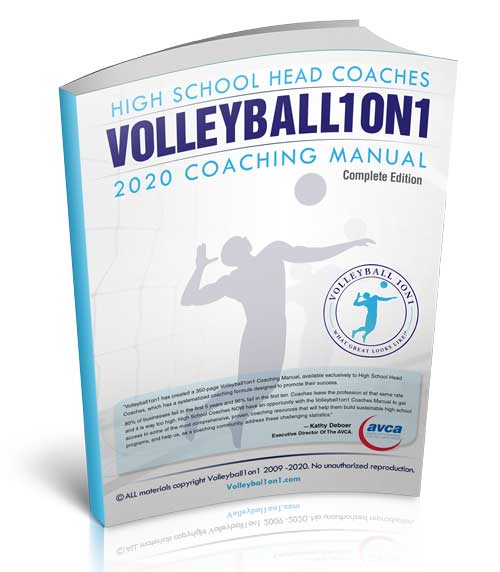 Attend our Coaches Clinic with Volleyball1on1 and learn how you can receive access to a 350-page in-depth color Volleyball1on1 Coaches Manual (Valued @ $497.00). This manual is a modern volleyball coaching guide with proven “Superior Coaching Systems” ™ for High School Varsity Head Coaches to launch their program to new heights.

80% of businesses fail in the first 5 years and 96% fail in the first ten. Coaches leave the profession at that same rate and it is way too high.  High School Coaches NOW have an opportunity with the Volleyball1on1 Coaches Manual to get access to some of the most comprehensive, proven, coaching resources that will help them build sustainable high school programs, and help us, as a coaching community, address these challenging statistics.”
Kathy Doboer – Executive Director Of The AVCA

“Although I’ve been coaching a long time, I still look for new ways and new ideas to help my staff and players.
The Volleyball1on1 Coaching Manual has been methodically designed by volleyball pioneer

Andor Gyulai, Co-Founder of Volleyball1on1.com. It includes the most modern volleyball coaching science and tools to provide High School Head Coaches, their staff and players with a winning formula called “What Great Looks Like!” ® that is a repeatable “Superior Coaching System.” ™ This is a great opportunity to get access to some of the most powerful coaching resources available today as a High School Varsity Head Coach. I highly recommend you attend this upcoming Coaches Clinic we have put together for you!” 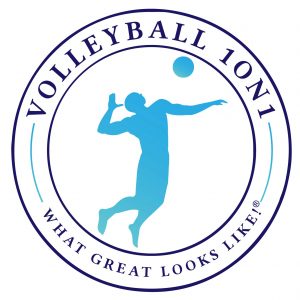 GREATNESS will apply in the wins and losses. In addition, it will help you develop players / people of character in your program which we define as “Whole Person Growth” ™ and “It’s Bigger Than Volleyball” ™.

High School Varsity Head Coaches who work with Volleyball1on1’s “What Great Looks Like!” ® “Superior Coaching Systems” ™ will learn how to develop players who are excellent communicative, goal-setting, self-directed, critical thinking lifelong learners who thrive in competition and under pressure, who know how to work as individuals and / or with a team as a member or a leader while being fair and considering others. 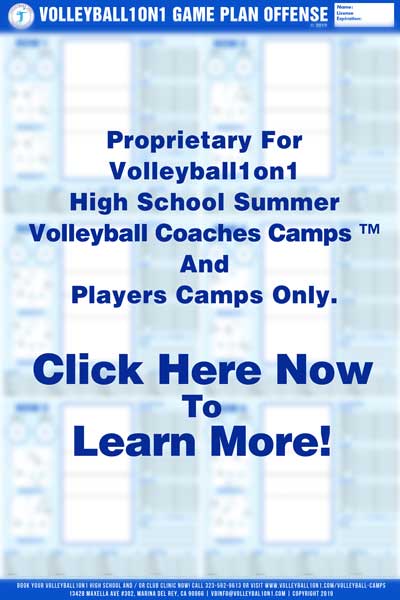 By measuring and displaying these and other important statistics visibly and clearly for you, your staff, and players to review as a team together each day in practice, High School Varsity Head Coaches have this groundbreaking opportunity to create an environment for sustained massive improvement for their team and overall program.

The Volleyball1on1 Practice Plan Outline Poster © ( 24” by 36” inch) helps make running practices EASY, EFFICIENT, and EFFECTIVE. Our laminated dry-erase poster is easy to write on and reduces the amount of time needed to write down a practice while making it EASIER for all skill levels of coaches to run a successful productive practice every time utilizing our 31 Volleyball1on1 Practice Plans.

1.) Creating an “ownership environment” whereby players can be more involved in the decision making. We believe this is critical for building trust and getting your players “buy in”. 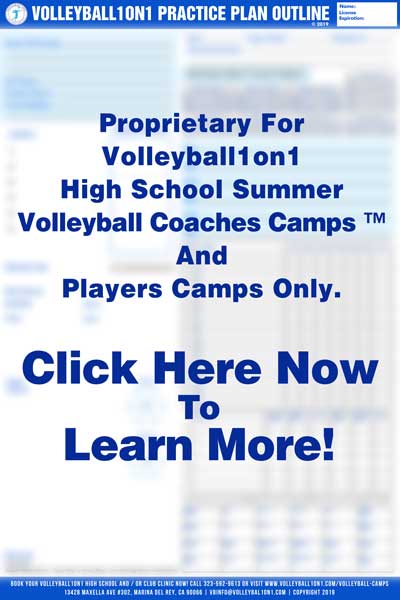 2.) Reinforcing a more competitive environment in practice.
3.) Including space for team and individual S.O.S. Stress Output Score ™. This is a Volleyball1on1 exclusive tool for helping players “self report” to improve their ability to manage stress.
4.) Reinforcing “It’s Bigger Than Volleyball!” ®. We believe at Volleyball1on1 our job as coaches is ultimately teaching life lessons through sports.
5.) Reinforces volleyball science for winning and our “What Great Looks Like!” ® Volleyball1on1 Playing Standard, Winning Team Culture, and Playing Coaching Standard.
6.) Reinforces “Whole Person Growth” ™ through “Bump Up” ™ and recognizing excellence in others.
7.) “Keep Playing Volleyball!” ™ – Create a practice environment where players keep playing beyond high school.
8) Reinforce “Learning As A Culture” and “Daily Improvement” through our affirmation at the end of every practice.
9.) Helps facilitate ALL SKILL LEVELS of coaches by running a more easy, efficient, and effective practice.

S.O.S. – Stress Output Score. ™ We teach eight proven techniques for helping players manage stress and pressure. These techniques are utilized by the best athletes in the world. They will help your players excel under stress on the volleyball court. These techniques will also help your players navigate better the stresses of life. An example is our proprietary Volleyball1on1 tool S.O.S. – Stress Output Score. ™

About Volleyball1on1.com And Coaches Clinic Presenters

Volleyball1on1 is also the only camp program that offers an entire system from how teams play on the court, to a clearly defined Team Culture, Coaching Standard, and Winning Playing Standard.

The result: Our Volleyball1on1 Summer Camps help High School Varsity Head Coaches and their programs develop excellent communicative, goal-setting, self-directed, critical thinking lifelong learners whothrive in competition and under pressure, who know how to work as individuals and or with a team as a member or aleader while being fair and considering others. 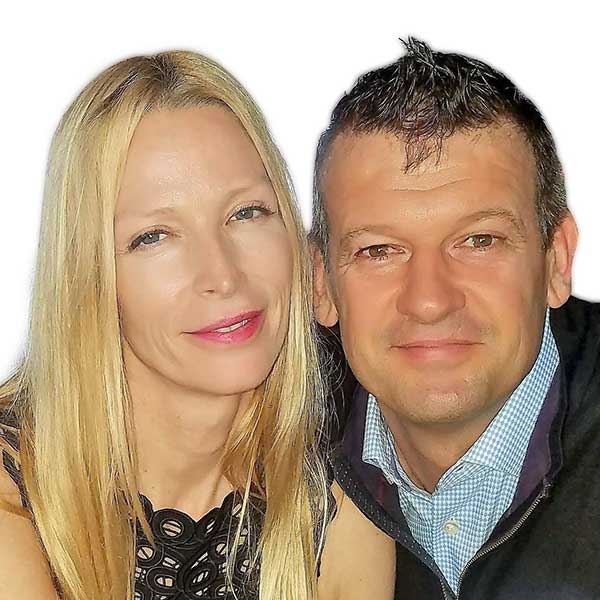 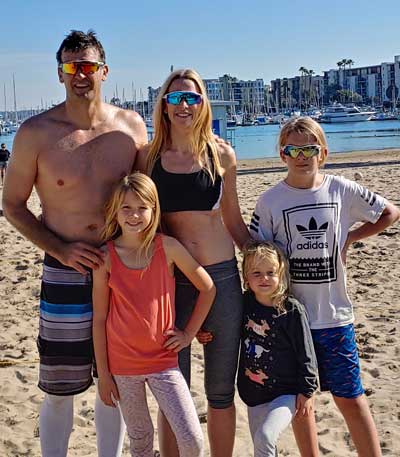 Vanessa Summers – Co-Founder Of Volleyball1on1.com – Vanessa Summers is author of three financial books, “The Girl’s Guide to Money & Investing”, “Buying Solo – The Single Woman’s Guide to Buying a Home”, “The Yoga of Money”. She has been profiled on National television shows, such as NBC, CBS, Fox, and CNBC. Prior to Volleyball1on1, Vanessa and Andor successfully ran a Los Angeles based multi-million dollar business seminar company and partnered with Jairek Robbins, son of mega motivational and business speaker Tony Robbins (Coach To Bill Clinton, Oprah, Mother Theresa). Vanessa’s journey has been filled with many significant achievements since a young age: from a top ranked teen tennis star athlete in Florida competing against Jennifer Capriati and Mary Jo Fernandez, to hi-fashion model in Paris and New York alongside Charlize Theron and Tyra Banks, to Hong Kong stockbroker trading millions of dollars a day in Southeast Asian equity.

Andor Gyulai and Vanessa Summers-Gyulai launched Volleyball1on1.com in 2009. They have been business and life partners since first meeting 17 years ago and happily married for over 13 years. Andor and Vanessa enjoy parenting their three amazing kids: Thor (12), Veda (8), and Charlie (3) along with exploring delicious dining, fitness, healthy living, beach volleyball, and other fun activities as a couple and family in sunny Marina Del Rey, California.