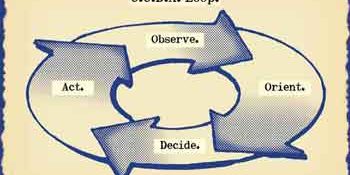 Today I want to share what is a fundamental shift in the way I feel volleyball should be taught! The ideas I will be sharing today build on coaching concepts first introduced by Karch Kiraly and others known as “Reading the Game”. After over 3 years of research through my own observations as a player / coach and working with experts in the field of vision I realized this system can be vastly improved. (Click here to see Article 1 and Article 2 on the Reading the Game Concepts.) 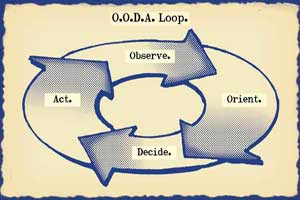 Colonel John Boyd coined the term O.O.D.A. Loop, in the 1950’s. Colonel Boyd, known as the “Fighter Pilot who changed the Art of War”, was an F-86 pilot and commander of a fighter group during the latter part of the Korean War.

The O.O.D.A. Loop is a process we go through hundreds if not thousands of times in a single day. It is a process that defines how we humans react to stimulus.

Colonel John Boyd believed that when at a disadvantage a competent pilot could still overcome that disadvantage by “Attacking the Mind” of his opponent. His observations led him to a greater understanding of human reaction time and the coining of the term O.O.D.A. Loop. Colonel Boyd trained his pilots based upon his observations of Human reaction time and as a result his pilots had a 10 to 1 kill ratio over the superior Mig-15’s.

Human reaction time is defined as the time elapsing between the onset of a stimulus and the onset of a response to that stimulus. The O.O.D.A. Loop, which stands for Observe, Orient, Decide and Act, is Boyd’s way of explaining how we go through the process of reacting to stimulus.

First we Observe, and keep in mind, we process approximately 80% of the information we receive with our sense of sight. (This is why training our vision through visual exercises is so important)

(The Schwerpunkt is the center of gravity or point of maximum effort!)

“Any man facing a major decision / stimuli acts, consciously or otherwise, upon the training and beliefs of a lifetime.” – John Boyd.

Personally I feel Orientation is the big missed key in current “Reading the Game” concepts as I discussed last week with my Renshaw Video example with Dr. Bill Harrison. Article 2 on the Reading the Game Concepts

The next stage is the Decision step in which you have to make a decision on what to do based upon what you have just observed and focused your attention on.

Finally you have made your decision and the last step is to Act upon that decision or perform the volleyball skill. Keep in mind that the O.O.D.A loop is what happens between the onset of a stimulus and the onset of a reaction to that stimulus.

Boyd, decision-making loop occurs in a recurring cycle of observe-orient-decide-act. The ability to speed up the cycle is also critical.

In volleyball elite player and coach can process this cycle quicker, thus observing and reacting to unfolding events more rapidly than their opponent, thereby “get inside” the opponent’s decision cycle and gain the advantage.

In sports, war, business, or life, the OODA Loop can help you grapple with changing, challenging circumstances and come out the other side on top. 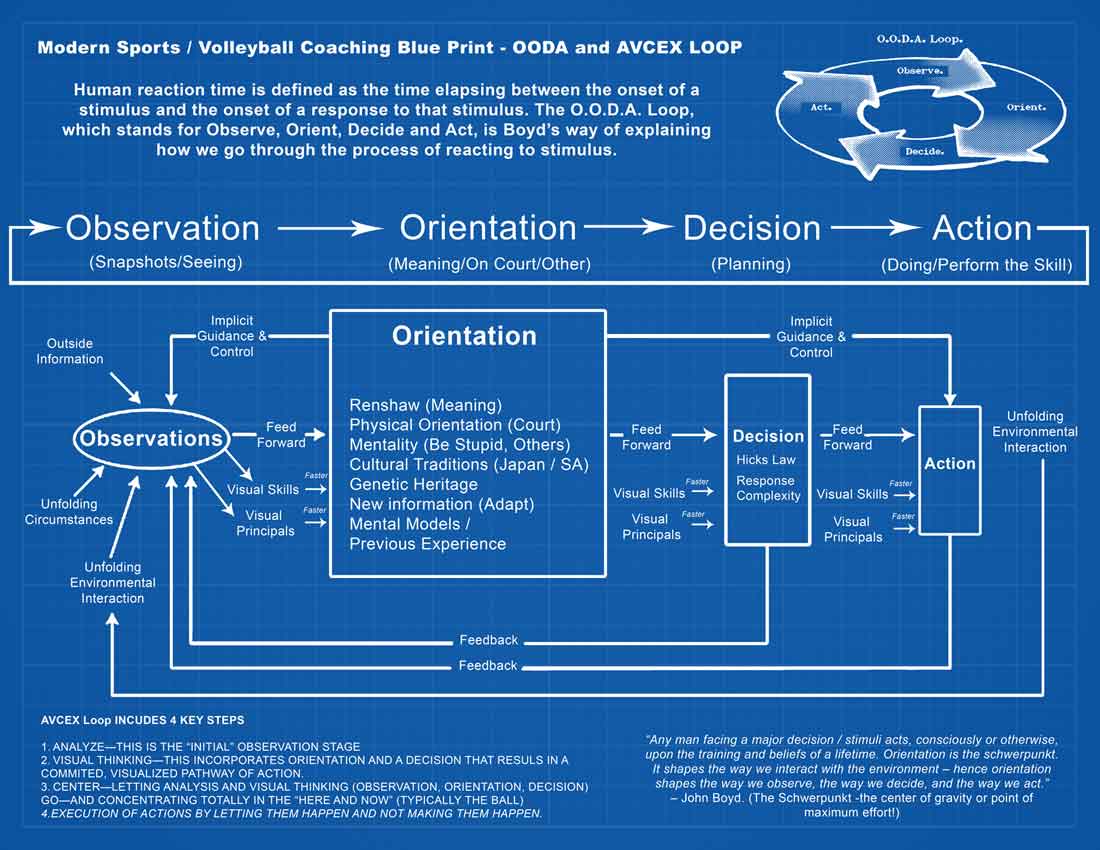 Over the next few weeks I will be sharing more information regarding the OODA and AVCEX LOOP, as well as other important concepts related to coaching volleyball.

Finally if you have thoughts or comments on this topic please let me know below in the comment section.

Tom Bayer
Go to Top
Call Now
We use cookies to ensure that we give you the best experience on our website. If you continue to use this site we will assume that you are happy with it.OkPrivacy policy