Are you a high school or club coach tied of the cost and effort of scanning the internet for videos or attending coaching clinics only to pick up 1 or 2 new coaching ideas for all your effort.

Would you rather tap into a proven successful coaching system where you receive 1 on 1 in-person support towards helping you achieve your fullest coaching potential? Support that includes live in-person training with you, your staff and your players, in your facility and over the course of your season?

Well hi, I am Andor Gyulai the owner of Volleyball1on1 and I have created the only Volleyball “Train the Coach” product in the market that does all this and cost you the coach nothing! Yes absolutely nothing! 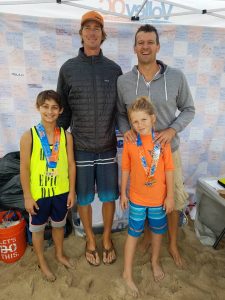 Andor Gyulai (Right) Coaching his son Thor, 9, (Orange) to his first gold for beach. Left Ed Ratledge owner of VolleyOc.com hosted the tournament and who Andor won a NCAA championship at UCLA with!

I started coaching volleyball at age 16 in South Africa with a very different set of challenges than most people face today. You see back then there was no internet and good coaching resources, normally in the form of books was often dated and hard to come by.

This problem persisted during my time winning championships at UCLA and running my own club of 10 team college. As a result when I saw what was happening with video and the internet 8 years ago I had an idea to change that, I started Volleyball1on1.

“My Vision with Volleyball1on1.com is to give volleyball coaches and players around the world instant access to easy to consume instructional videos, drills, practice plans, workouts, online courses and online lessons / evaluations from the absolute best players and coaches in the world. Growing up outside the United States in South Africa, I never had access to coaching from the best. Now I have changed that forever! With Volleyball1on1 you can have coaching legends, Olympic gold medalists, NCAA MVP’s, AVP and FIVB beach champions personally share their insider secrets that made them and their players the best! There is simply no better resource for learning beach and indoor volleyball online!” – Andor Gyulai, Founder & Owner of Volleyball1on1.com

Little did I understand at the time that a new set of challenges would arise from filming 2000+ videos with the best players and coaches in the world. Namely: More is Not More! Meaning, time is a high school or club coaches biggest commodity. Between being a teaching, coach and often parent little time is available to sift through the multitude of resources or travel to a coaches clinic for the weekend.

Coaches wanted a step by step system! They wanted the system to train them, their athletes and their staff preferably in their gym according to a schedule that works best for them. A system that covered every aspect of the game and that grew and changed with the game and the science behind coaching the game. This system needed to address new challenges, from “Helicopter parents,” to “motivating this generation of player.” A system that included printed manuals as well as online videos to accompany in person training. A system that did not just last a weekend, but rather a season so as to address challenges as they arose.

Well look no further! I have been coaching for 25 years, I have worked with the best players and coaches in history and I have developed the system that can do all this and more, plus is FREE to you the coach!

Below, not sure what to use?

In my work with youth coaches I understand most of you suffer from: lack of time, lack of resources, you don’t exactly get into coaching volleyball for the money, demanding parents, and players with different needs and motivations than you.

“I started coaching volleyball at age 16 (1991) as the head coach of my high school team. This was before the age of the internet and living in South Africa there were very little resources on how to coach volleyball successfully. I ordered Volleyball Magazine from America, I scoured books all for only a few insights that I were often dated and that conflicted with ideas of many coaches that taught me.

I was then fortunate to move to America and play Volleyball in college for 1 year at BYU under Carl McGown and then 4 years at UCLA under Al Scates where I won a NCAA Championship. These were two of the best coaches in volleyball I still found little in the form of resources.

While at UCLA I continued to coach recreation, high school and club volleyball and ended up starting my own club where I coached 10 teams.

Yet in all this time the same challenge persisted, finding resources. A few years later as the internet and online video was just starting to take hold I noticed how the internet may have the potential to change everything.

At this stage I started Volleyball1on1.com and since then I have filmed over 2000 Instructional videos with the best coaches and players in the world.

“My Vision with Volleyball1on1.com is to give volleyball coaches and players around the world instant access to easy to consume instructional videos, drills, practice plans, workouts, online courses and online lessons / evaluations from the absolute best players and coaches in the world. Growing up outside the United States in South Africa, I never had access to coaching from the best. Now I have changed that forever! With Volleyball1on1 you can have coaching legends, Olympic gold medalists, NCAA MVP’s, AVP and FIVB beach champions personally share their insider secrets that made them and their players the best! There is simply no better resource for learning beach and indoor volleyball online!” – Andor Gyulai, Founder & Owner of Volleyball1on1.com

But after filming 2000+ videos and having a massive library of post I realized we had a new problem. More is not more! The biggest challenge a high school coach has is time. Between being a teaching, actually running practice, and coaching matches, and finally family there is little or no time for personal development to sit infront of a computer or take off for a weekend to become a better coach,

I think this is where we write me telling my story and relate it to below!

What are high school coaches struggling, frustrated, overwhelmed and concerned about:
Or Focus on what they want:

How Can I show my expertise?

Most high school and club coaches start with the goal of looking to positively impact the life your young volleyball players. In the coaching process of a season you quickly realize the many challenges you face:

We travel to you, train in your gym, and teach both your athletes and staff the same system. The camp is offered over four days, Tuesday – Friday (can be customized if needed).

Furthermore, Volleyball1on1 is flexible, responsive, and ready to make the organizational process easy for you. High school coaches along with players will receive a powerful foundation in the science of coaching and playing volleyball. You can expect cutting edge knowledge that will range from new important coaching philosophies, to practice planning, and powerful insightful drills.

Sum Up of what we offer!

Why this problem exists (And why you struglled to solve it before).

What you can achieve with this product and what others achieved

What’s exactly in the box and how does it work?

Tell Them how to buy and the deadline