Start to the 2012 NVL Tournament Season

You are here:
BeachVolleyball GeneralVolleyball Tournaments

One week ago was the start to a 2012 beach volleyball season for a newly found tour, The NVL. Their first event of 2012 was coupled with the Preakness Horse Race in Baltimore, MD in the hopes that people going for the races might stop and catch some volleyball also.

Jennifer Kessy and April Ross won the women’s championship, but the real story of the tournament came when Casey Patterson and Ryan Doherty surprised the past gold medalists from Beijing Todd Rogers and Phil Dalhausser.
Patterson-Doherty outlasted Rogers-Dalhausser in a close 3 set match. With the first set 23-21 going to the Patterson-Doherty duo their appeared a glimmer of hope that the Olympic veteran duo of Rogers-Dalhausser would be upended. Rogers-Dalhausser won a close second set 21-19 to tie the match again. Rogers-Dalhausser started the third set with a 6-2 lead and looked almost guaranteed victory. However, this is a true Cinderella story. Patterson-Doherty fought back to tie the game 7-7 and from then on it was a neck and neck race to the finish. Patterson-Doherty managed to get a two point lead from a tie of 13-13 and won the third set 15-13.
The Kessy-Ross duo played their finals match against No. 2 seeded Jenny Kropp and Whitney Pavlik. They easily beat them in two sets with scores of 21-13 and 21-16.
Overall, I’d say that this first NVL tournament of 2012 was beyond successful. A dramatic finish and ending like what happened with The men’s championship game is exactly what the NVL needs to get more fans. 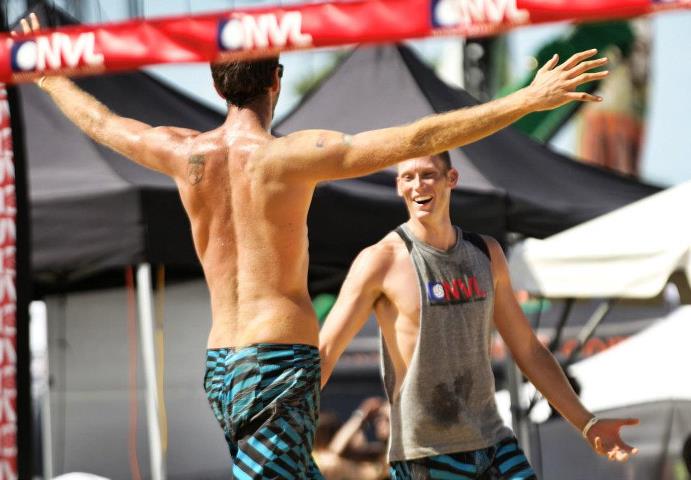