It is possible that you have assembled the most talented, wildly gifted volleyball team of your coaching career. You know all the tricks, all the right drills and the perfect amount of reps to get your team prepared for the upcoming season, which is sure to be a rousing success. Except it’s possible that none of that matters if your team is missing one critical ingredient.

According to Alan Knipe, head coach of Long Beach State and the 2012 United States men’s national team, the first factor in determining why a team would fail is a lack of trust.

(See: The 5 Dysfunctions of a Team – A strategy used by Alan Knipe and Volleyball1on1 to build successful teams)

And the first and by far most important factor in developing that trust is the recognition of excellence.

According to a research study in the Harvard Business Review, “The neuroscience shows that recognition has the largest effect on trust when it occurs immediately after a goal has been met, when it comes from peers, and when it’s tangible, unexpected, personal, and public. Public recognition not only uses the power of the crowd to celebrate successes, but also inspires others to aim for excellence. And it gives top performers a forum for sharing best practices, so others can learn from them.”

As the great John Wooden, famed coach of the legendary UCLA Bruins basketball team that dominated the 1960s and 70s once said:

This can be done in ways both big and small. We at Volleyball1on1 encourage you to simply celebrate wins both in front of the team and with individuals. There is no greater satisfaction for a player than to see a look of genuine happiness on a coach’s face after a win. And there is no reason to stop there.

Laud a player’s performance in practices, before practices, after matches, before matches – there is no wrong time for recognition. The more spontaneous, the better.

If they performed a skill you have been harping on all week, let them know. If they played spectacular in a match, or were a great teammate, or did anything that is legitimately deserving of recognition, based on your team’s values and goals, recognize it. Show them your appreciation.

When you’re pouring over film and analyzing points of emphasis and improvement, don’t forget to point out a player’s success. If they finally squared up on a set, or got their approach just right, or dug that ball they’ve been trying to dig for weeks on end, pause the film and acknowledge it. 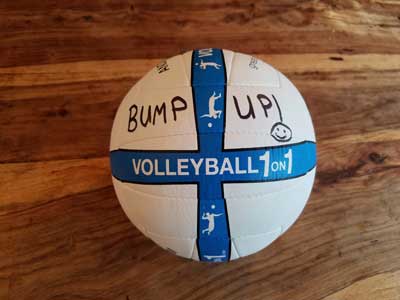 One of our favorite past-times at Volleyball1on1 is what we like to call “Bump Up.” At the end of every practice, the players are given a ball, and the person with the ball “Bumps Up” another player by saying something they did well that practice. That person then takes the ball and “Bumps Up” a different teammate, until every member of the team has been “Bumped Up” and recognized for their excellence.

All of these are tangible, unexpected, personal and public. It uses the power of the team to celebrate success and helps others aim for excellence.

And don’t think that feedback should come exclusively from the coaches. Oh, no. Parents can have one of the greatest effects on players – and also one of the most detrimental.

There is little that kills the confidence of a player more than a parent screaming for their child not to miss a serve, or not to make a mistake. It directly opposes the growth mindset and their ability to become a better learner through the five stages of learning: Believe, engage, make mistakes, look stupid, and practice.

To provide a visual for parents, we provide a handout titled the “Tale of Two Parents.”

Through our Volleyball1on1 Camps, Ongoing Coaching Support and our Volleyball1on1 Coaching Manuals we work with coaches and teams to help intentionally create character-based team cultures, provide a blueprint for team leadership, develop confident, tough-minded, fearless competitors, and train coaches for excellence and significance. Developing trust is the most critical, fundamental component upon which a great team is built.

Schedule a complimentary call if you are interested in learning how Volleyball1on1 can help you become a better coach and build a culture of trust in your program.