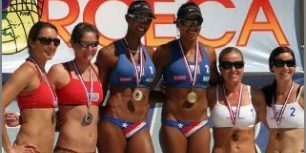 This past weekend I had the unbelievable opportunity to volunteer at the NORCECA beach volleyball tournament held at the U.S. Olympic Training Center in Chula Vista, CA. While the weather and desert-like conditions weren’t the most conducive to an amazing sand volleyball experience the event was amazing. For the men’s side, Canada’s Chaim Shalk and Benjamin Saxton finished 1st. 2nd was the USA’s Will Montgomery and Tri Bourne. And Canada’s Cameron Wheelan and Michael Plantinga took 3rd after defeating another USA team. For the women the USA took 1st and 2nd as Emily Day and Heather Hughes defeated Morgan Beck and Summer Ross in the finals. Mexico’s Martha Revuelta and Bibi Candelas defeated Canada to take 3rd.

My first experience at the event was on Friday, the first day of competition. Since I had been in the area I decided it would be a great idea to check out some international volleyball. I mean it’s not everyday that you have international level volleyball practically in your own backyard. On Friday, I was there for only brief period of time. I watched my buddies Marc Lomeli and Anthony Pippen of the U.S. Virgin Islands lose to the eventual tournament champion Canadian team of Chaim Shalk and Benjamin Saxton. While they lost the match was very fun to watch and they came as close to winning as anybody else I saw all tournament. I, also, had the great pleasure of meeting one of beach volleyball’s legendary players and coaches, Dane Selznick.

Unfortunately, I had other commitments and had to leave after seeing the one match Friday and couldn’t return Saturday because of a high school girl’s indoor tournament I was reffing. But I returned Sunday morning, bright and early, to volunteer and help with whatever the tournament staff needed. When I first arrived I helped to rake the courts which had become slightly pitted (ie. the courts had higher levels of sand around the edges of the court and at the net than in the middle). After raking, I was assigned to shag balls on court 2. The first match that I helped with was between the two Canadian teams, Canada-1 (Chaim Shalk and Benjamin Saxton) and Canada-2 (Cameron Wheelan and Michael Plantinga). It was amazing with the score remaining very close until around 11-11 when the Canada-1 team would begin to get a lead.

On the court directly next to ours (Court 4) was an amazing match between two of the American teams. The USA-3 team (Will Montgomery and Tri Bourne) and the USA-5 team (Avery Drost and Jesse Rambis) took the first set of the match to a score of 31-29. The first set ended after a controversial double call. Our match had finished and so I watched the majority of the second set. It was the epitome of competition. Both teams battled back and forth, point for point until the USA-3 team earned the one needed point to put them up by two.

I ended up with the great fortune of shagging balls for both the men’s and women’s finals. The Women’s match of Day-Hughes against Beck-Ross was amazing. Morgan Beck and Summer Ross played extremely hard, but the Emily Day and Heather Hughes experience as a team became apparent down the stretch as they won the match in 2 (21-19, 21-17). The men’s final was some of the best beach volleyball I’ve seen in quite awhile. There were points where both sides shanked a pass, but then their teammate would sprint through the sand and dive 10+ meters to not only touch the ball, but send it high enough in the air to successfully play it over the net. The Canada-1 team stepped up their game from the other matches I’d seen and looked to be in control the entire match. Benjamin Saxton had some truly impressive blocks that ultimately lead the team to victory.

Overall, it was a spectacular experience and something that I’d love to be a part of in the coming future.