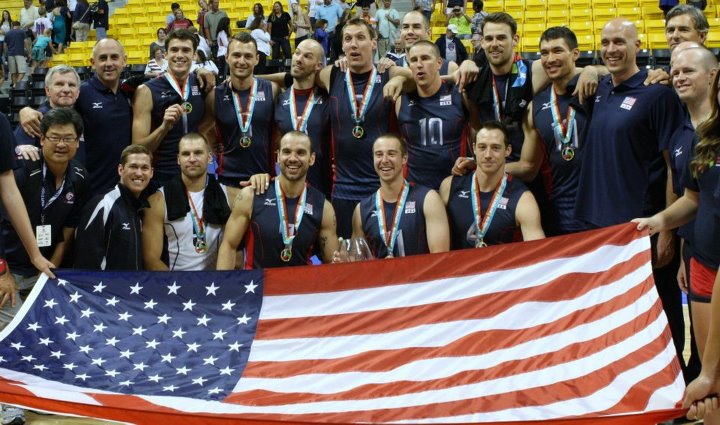 A few days ago was the finals to a week long event for Men’s International Volleyball. It featured the United States and Canada. But what led up to this showdown?

It’s a week before the start of the tournament and a truck has pulled into the parking lot at Long Beach State. The truck is loaded with everything for the tournament. It has banners, sport court tiles, printers, balls, and just about everything else you can think of that’s needed for a tournament. A forklift is used to carry all the crates and boxes into the gym.

After everything has been unloaded the fun part begins. A crew of volunteers and staff members are brought in to unload and build the court. They start with rolls of carpet laid rolled out across the floor. Then they begin laying tiles out in 4×4 sections and snapping them together. The whole process takes several hours, but the effort is worth it for the great volleyball played on them afterwards.

For this particular tournament there were 8 teams who would participate. Two pools of 4 teams. One pool consisted of Canada, Puerto Rico, Cuba, and the Dominican Republic. The other pool had the USA, Trinidad and Tobago, Mexico, and Costs Rica. Matches were scheduled Monday through Saturday. Some notable games before the semifinals were Cuba’s surprise loss to Canada on Wednesday in just 3 sets. This came as a huge surprise to a lot of people because Cuba was considered to be the top team in the tournament with their #5 FIVB ranking. The USA was expected to face Cuba in the finals in a face-off of the #5 and #6 FIVB ranked teams.

Needless to say, Canada threw a curve ball into most people’s tournament predictions (some proof that there are no guarantees in sports). The expected USA vs. Cuba showdown ended up occurring one night earlier than expected and it was a terrific show. Cuba used its athletic advantage in the first set to beat the US. However, the US ended up taking the next 3 sets due to their team discipline.

The other semi-final match between Canada and Puerto Rico came down to the wire. The two teams battled it out each taking 2 of the first 4 sets and forcing a 5 game to decide the victor. The game was intense throughout. Canada managed to win the last set 15-11, but the score doesn’t reflect how close the game really was. The intensity of both teams was overwhelming. I was disappointed to have the game end because of the true competition displayed. The competition was similar, but not as intense the next night when the US played Canada.

The finals match featured two phenomenal teams in the United States and Canada. The Pyramid arena at Long Beach  State was packed. From what I could tell the only empty seats belonged to people who had left them to stand and watch. The air was electric with noise. The Canadian team led by their right-side hitter Dallas Soonias worked their best to win, but the US team was focused on victory. In just 3 sets the US had beaten Canada to claim their ticket to the Olympics.

After the game the various FIVB, NORCECA, and USA Volleyball representatives gave out awards to the top teams and players from the tournament.